Somalia: US Army: Al-Shabaab lying, we defeated them in Ballidogle military base 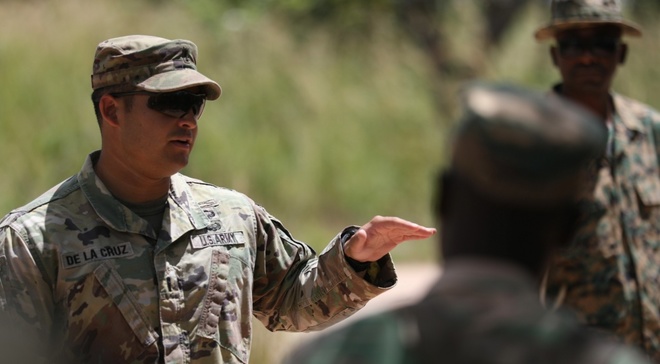 About 72 hours after the release of Al-Shabaab video that featured their leader Ahmed Omar, the United States has fired back, accusing the militants of 'lying'.

In a 52-minute video, the Al-Qaida associates claimed to have made significant progress in defeating US forces in Somalia, citing a recent incident in Ballidogle military base.

The militants also warned US and allied forces against continued stay in Somalia, arguing that they will be forced to evict then through major assaults.

General Miguel Castellanos of U.S. Africa Command deputy director of operations on Friday dismissed the recent video, terming it as 'propaganda and conspiracy theories' by the Somali-based militants.

"Terrorist organizations often spread disinformation and falsities as propaganda to bolster their destructive cause and to aid recruiting efforts," he said in a statement.

The top military boss insisted that at least 15 militants were killed during the attempted Ballidogle military base raid, praising swift response by the Somali's Danaab special forces who foiled the attack.

General Miguel further said the IEDs that had been planted in the vehicles were not able to explode outside the military base, claiming that it was detonated before blowing.

"To be clear, the claims made by al-Shabaab regarding a recent assault on a Somali military compound in Baledogle are simply untrue," Miguel said.

"Three vehicle-borne improvised explosive devices were part of the failed attack, but they proved futile as two were denoted and destroyed before being able to enter the base," he added.

The US insists that it will continue supporting sustainable peace processes in the Horn of Africa nation which has experienced instability for the last three decades.

Somalia has struggled to establish a people-backed government for three decades after the toppling and subsequent assassiation of Said Barre in 1991.

"We believe the U.S.’s small, but strategic footprint approach is sustainable and is supporting the incremental progress we’ve observed," he said.

Further, the military general insisted that the Al-Shabaab militants have no capacity to attack the US despite the fact that they are 'technically' unable to do so.

"These terrorists have aspirations to conduct attacks not just in East Africa, but in Europe and the U.S. as well. While they don’t have the capability to strike the U.S. homeland today, they certainly possess an intent to do so."

Ballidogle military base attempted raid was the first major assault by the Al-Shabaab on US forces in as many years. US trains Somali National Army in the base.

The US and AMISOM forces are keen to exit Somalia by 2021 after the country goes for elections. AMISOM has over 20,000 peace keeping soldiers in Somalia.

Omar, the Al-Shabaab leader, has been under the US surveillance for four years now. Washington DC placed $6 million bounty on him. He took over from Ahmed Godan who was killed by the US strike in 2015.

On Wednesday, Mr Omar was partially captured in the video lecturing militants hours to the Ballidogle raid. He accused the US of 'killing innocent civilians'.