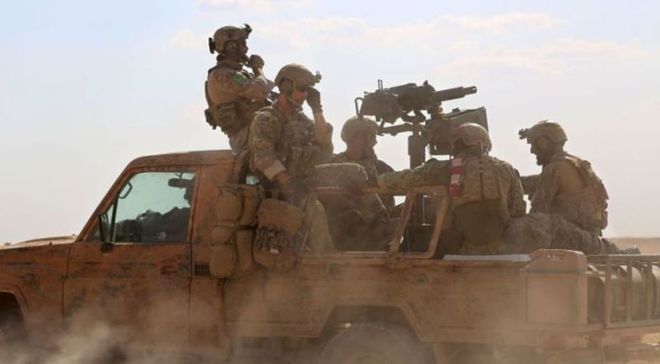 A military source told Garowe Online that at least four militants have been killed during the operation, which was carried out on the outskirts of Bar-Sanguni, about 45 kilometers north of the coastal city.

The allied troops were reported to have liberated the area from the Islamists following a heavy gunfight that left several Somali soldiers injured. It's yet unclear the exact number of casualties on foreign forces.

Recently, Jubbaland State president Ahmed Madobe and Somali army commander-in-chief, Abdiweli Jama Gorod paid separate visits to the attacked base to boost the morale of the soldiers stationed there.

The wide-scale anti-al-Shabab offensive came after a U.S. special operations soldier, Staff Sgt. Alexander Conrad, 26, was killed and four others were injured in a firefight against the Islamic extremists in Bar-Sanguni.

The assault took place on 8th June, 2018. Al-Shabab said that its fighters had struck a joint American-Somali military base on the outskirts of Kismayo, mounting what it called a “fierce attack.”

The U.S. Africa Command, [AFRICOM] which overseas operations in the continent said the troops had been on a mission to clear al-Shabaab from contested rural areas the rebel-held controlled, “and establish a permanent combat outpost”.