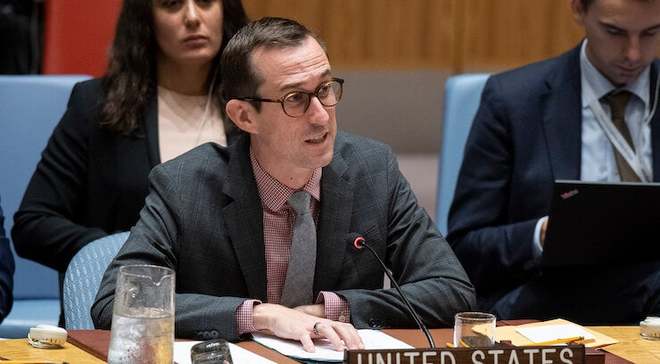 MOGADISHU, Somalia - The deployment of Somali National Army [SNA] troops to conflict-prone Gedo region is unacceptable, the US has said, adding that "it diverts resources from the agreed roadmap for security operations".

So fragile has been the situation in the region under Jubaland, that dozens of locals have left en mass, fearing for possible clashes between local forces and SNA.

At least 700 Turkish-trained SNA troops were deployed to the region early this month, with the government maintaining that "they will defend our borders".

In an interview with Universal TV recently, President Mohamed Abdullahi Farmajo said: "we may not have the capacity but it's the role of FGS to defend the country's borders".

However, Jubaland has often maintained that the deployment amounted to "naked aggression" on its territory, vowing to "revenge" at the appropriate time.

US condemns SNA deployment in Gedo

But at the United Nations Security Council on Monday, the US raised concerns about the decision, in a statement that could instantly affect its relationship with FGS.

Rodney Hunter, the Political Coordinator, the U.S. Mission to the United Nations, said: "The deployment of SNA troops to a politically motivated offensive in the Gedo region of Jubaland is unacceptable and diverts resources from the agreed roadmap for security operations.”

This is the first major statement by the international partners over SNA presence in Jubaland, the western state that has been at loggerheads with Mogadishu.

But according to the US, the impasse between the federal government and member states could pave room for Al-Shabaab dominance in the affected regions, thus derailing the fight against the terrorists.

“It is imperative that FGS and member states security services focus on combatting al-Shabaab, rather than engaging in armed conflict with each other to resolve political disputes," he added.

Although its the prerogative of FGS to defend Somalia's sovereignty, most states have functional security forces as part of concerted effort to degrade Al-Shabaab.

To end the anxiety in Gedo, the US said, “We call on President Farmaajo to end the Somali National Army offensive in Gedo, and to meetJubaland President Madobe for dialogue."

Kenya has also been dragged to the crisis, with Mogadishu accusing Nairobi of harboring Jubaland minister Abdirashid Janan, who is accused of orchestrating the Gedo stalemate.

Interference by FGS in member states

But the US also could not skip the attention of regional elections, which have also seen the FGS struggle to stamp its authority, leading to dramatic fallout.

Opposition parties have accused FGS of meddling in regional politics, claiming that Farmajo is keen "to impose his loyalists" ahead of December polls.

While acknowledging the difficult phase in Somalia's transition, the US raised concerns over the proposed universal suffrage for December elections even with a commitment to shun clan quotas that have been marred with violence.

For instance, the recent elections at Galmadug put Washington on spot, in which ambassador Donald Yamamoto acknowledged the controversial victory of Ahmed Abdi.

Mr. Abdi, a former minister, is said to have been backed by Farmajo, a move that led precipitated to boycott by four top contestants.

"We urge FGS and federal states to work together to keep elections on track this year and agree on a practical model for peaceful, timely, inclusive, and credible elections," the US said.

Although Washington acknowledged flaws in the Galmadug and Southwest elections, it also hailed disgruntled candidates for "shunning from violence".

Internal feuds between regional states and FGS, he said, drag the fight against the militant groups in Somalia, a move that could spark further fallout.

Al-Shabaab, the US insisted, "remains a deadly and destabilizing force within Somalia and across the region".

Last week at Gedo, Jubaland regional forces were forced to flush out the militants, who had taken advantage of the standoff to erect barricades for illegal tax collection.

Although the US believes AMISOM and SNA troops have to a large extent neutralized the militants, more needs to be done due to the impending exit of the UN-backed troops.

"We welcome the progress Somali security forces and AMISOM have made against al-Shabaab in Lower Shabelle, but the operation has stalled," he noted.

"The government must find a solution to generate capable forces and not allow reversals of recent security gains."

Gedo crisis almost put KDF troops at crossroads with their Ethiopian counterparts due to conflicting interests in the war-torn nation.

While KDF supports Jubaland due to its partnership with Nairobi in the war against Al-Shabaab, ENDF has been key allies of FGS, would whom they are accused of "invading" Kismayo jurisdictions.

Both KDF and ENDF are critical in the war against Al-Shabaab, and their conflicting stand could further jeopardize the fight against militants, Rashid Abdi, a researcher said.