Somalia: US welcomes recognition of Madobe amid Jubaland protests 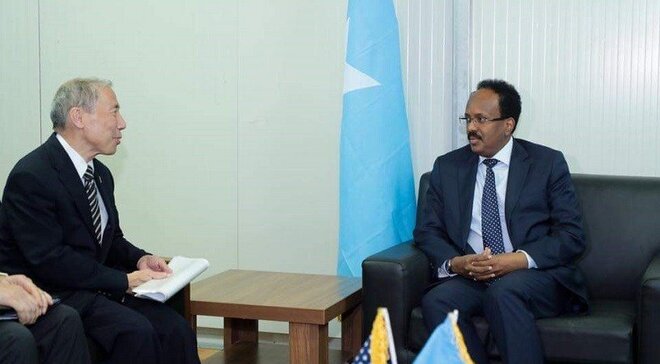 MOGADISHU, Somalia - The United States of America has welcomed the recognition of Ahmed Islam Mohamed alias Madobe as the president of Jubaland, but the move could backfire given protests by the Kismayo-based administration, which dismissed Villa Somalia move as "null and void".

President Mohamed Abdullahi Farmajo's administration had recognized Madobe as interim leader for the first time in almost ten months after his re-election, a move which caught many players unaware given existing impasse between Jubaland and Mogadishu administration.

While appreciating the decision by Villa Somalia to hold a dialogue with federal states, the US, which is a major stakeholder in Somalia's quest for peace, lauded recognition of Madobe, adding that such a move was key to Somalia's peacebuilding efforts.

Dialogue and reconciliation, Washington added in a statement issued by the US embassy in Mogadishu, will help in the reconstruction of Somalia, a country which has struggled to contain inter-clan conflicts and Al-Shabaab menace for years now.

Jubaland has been one of the epicenters for escalating tensions between the federal government and Madobe, a move that has significantly contributed to tensions between armed forces in Gedo region, which Madobe blames Farmajo of plotting to "establish" a parallel administration.

The armed conflict in the region has also out Africa Union Mission forces at loggerheads, due to the fact that the Ethiopian National Defense Forces [ENDF], who man Sector-III, works with FGS but the KDF team from Kenya closely works with Jubaland administration.

In February this year, Jubaland regional forces clashed with Somali National Army [SNA] within Balad-Hawo and Doolow districts, leading to a stern warning from Americans about the escalation of violence in the region.

In a statement, FGS had maintained that Madobe is the "interim president of Jubaland administration", adding that his term should expire after two years, starting the day he assumed office for the second term. After that, it added, fresh elections will be held in the region.

Should the proposal stand, it means Madobe's term will expire on October 2021since he took the oath of office last year in October. The FGS had blocked a number of senior leaders from attending the event, forcing some of them to use Kenya as a gateway to Kismayo.

Recently, Madobe reached a historical consensus with his three of his main rivals, who agreed to recognize his August 2019 victory. The team is set to officially join a unity government, a move that could have caught Farmajo by surprise.

Already, Jubaland has insisted that Madobe will complete his second term of four years. Abshir Mohamed, the Jubaland State House Chief of Staff, said the statement by FGS was "illegal", adding that it had no basis.

"This statement has no legal standing. It is against both the Somali Federal constitution and the Jubaland State constitution," he said, adding that, "we are not interested in their continued destabilization of our region."

The FGS had said President Farmajo has invited members of the national security council among them regional leaders for dialogue over the election process, security, and measures to combat COVID-19. A technical team will propose a date, the statement added.

The FGS has been accused previously of among others, destabilizing federal states by manipulating local elections, dragging the election process that is scheduled in December, and "illegal" deployment of non-AMISOM Ethiopian troops to sections of Jubaland and Southwest.

Jubaland's latest stand could hamper the proposed talks between FGS and federal states, which are expected to take place this month over impending elections in Somalia later this year. The US is monitoring the situation through ambassador Donald Yamamoto.