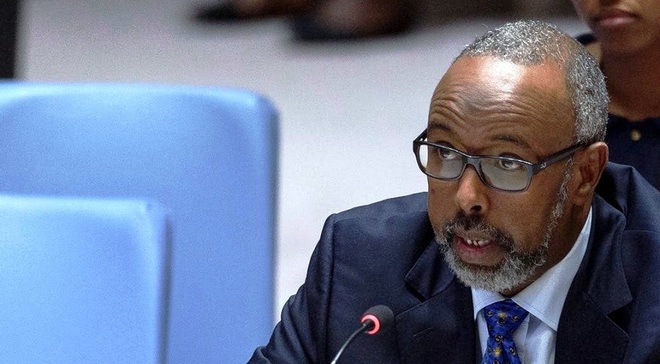 NEW YORK, US - The Federal Republic of Somalia was on Monday elected as substantive Vice Chair of the United Nations General Assembly [UNGA], a seat which it will hold for the next one year, a move which now places it in strategic position to handle a number of major international issues.

Ambassador Abukar Osman, who serves as the Mogadishu envoy to the United Nations, will now deputise Volkan Bozkir, who will serve as the chairperson, after Turkey won the vote to lead UNGA. Somalia and Turkey have a close mutual partnership which dates back to 60s.

In a tweet, Abukar was quick to note the mutual working relationship between Somalia and Turkey, adding that Mogadishu would work closely with Ankara to push for a common agenda at the United Nations headquarters in New York.

"Congratulations to the Somali government and people! Also, i would like to take this opportunity to congratulate the brotherly people and country of Turkey Volkan Bozkir and you have our full support , we are looking forward to working with you," he wrote.

The two will now define the agenda for the 75th session of UNGA whose term expires in June 2021. The win for Somalia comes at the time it's celebrating 60th anniversary since gaining independence from both Britain and Italy.

Internally, the country is struggling with a myriad of challenges among them unending inter-clan conflicts, political squabbles and Al-Shabaab menace. The challenges have almost disrupted efforts to reconcile the country and possibly hold elections.

Ahmed Awad, the Horn of Africa nation's Minister for Foreign Affairs, hailed Somalia for the victory, adding that Ambassador Abukar will "preside over important affairs at the UN". The win, he noted, also demonstrates Somalia's success in foreign policy.

"Somalia’s PR to the UN, Amb Abukar Osman has been elected the VP of the Somalia UNGA 75th Session with support from UN members. Amb Abukar will preside over important affairs at the UN. Sincere congratulations to Amb Balle. It’s a testimony to the success of Somalia’s Foreign Policy," he said.

"I am delighted to offer my warmest congratulations to the newly elected Vice President, of the Somalia UNGA 75th Session [2020/21] Ambassador Abukar Osman. I wish him success during his mandate," added Senator IIyas Ali Hassan.

Through communication boss Abdinur Mohamed, Villa Somalia also welcomed the victory, noting that it will significantly shape the traditional relationship between Somalia and Turkey, which has over years stood with Mogadishu on development.

"Brotherhood shaped by destiny and design now sharing leadership at a global platform. A 75th UN General Assembly whose Presidency led by Turkey's Volkan Bozkir will see Somalia:s Abukar Osman as the Vice-President," he said.

This will be the forth time Somalia will be serving in UNGA. The country was in charge during the 18th session [1963/64] through Hassan Elmi, 34th session [1979/80] under Abdirizak Hussein and Ahmed Aden and during the 41st session [1986/87] through Abdullahi Osman.

And for 33 years, Somalia has been handling the internal challenges following the ouster of dictator Siad Barre, a move which literally affected the international confidence in the country. Monday's victory is also a vote of confidence on Somalia's functional foreign policy.

Its victory also comes almost a fortnight after neighboring Kenya won the United Nations Security Council non-permanent after defeating Djibouti. The two seats are critical for the East Africa nations and would significantly boost regional integration.