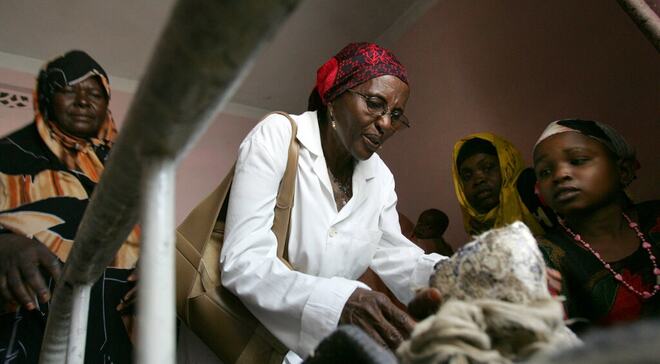 MOGADISHU, Somalia - The Federal Republic of Somalia is mourning the death of one of the most adored and renowned medical doctors, whose contributions to the health sector in the war-torn nation earned her several aware, besides being nominated for the lucrative Nobel Peace Prize award.

Dr. Hawa Abdi Dhiblawe, 73, died in a Mogadishu hospital, within a town where she cherished as home, despite decades of civil war and uncertainty, that drove away most professionals from Somalia, exposing an impoverished population to a host of myriads, including stagnated education and understaffed health sector.

Born in 1947, Dr. Abdi has been working in Somalia where she opened a hospital that focused on maternal health besides treating children and thousands of people who were in need of medical attention. Her efforts to help the poor also made her win several humanitarian awards both at the local and international stage.

In 2012, she was among those nominated for the lucrative Nobel Peace Prize award but she didn't win it. But her recognition at the world level brought about optimism and hope to Somalis, most of them who have been inspired by her philanthropy and a humanitarian heart.

The government of Somalia announced her death on Wednesday but it did not disclose circumstances behind the death. However, it is believed that she has been struggling with poor health in recent years and took the final bow at a Mogadishu hospital under the close care of her family members.

Tributes continue to pour in memory of her service to the nation. In a tweet, President Mohamed Abdullahi Farmajo said Somalia is "proud" of her legacy, adding that her contributions to the country will be remembered by Somalis forever.

"Hooyo (Dr.) Hawa Abdi is an irreplaceable icon. This nation is proud of your legacy for mothers and infants, for your selflessness, for all the lives you saved and for ensuring you served Somalia in the least way you could. We cherish you forever. Innalillahi Wainaileyhi raji’un," he said.

"Amb. Yamamoto and the US Somalia team offer deepest condolences on the passing of Dr. Mama Hawa Abdi. She will be remembered for her selfless service to the people of Somalia. We honor her legacy and mourn her loss with the family, friends, and Somalia," the embassy said.

Her service to Somalis was also recognized across the border, particularly in Kenya. She rescued many children from impending death during the civil war, some who managed to be accommodated elsewhere in the world, where they are currently working.

Yusuf Hassan, an MP for Kamukunji in Nairobi, termed her "an extraordinary doctor and human rights advocate who selflessly dedicated her life to waging peace and saving the lives of thousands of people in her troubled nation". "What a great loss. My condolences to her family and the Somali nation."

"I am learning late Dr. Hawa Abdi was also a campaigner against skin bleaching. She taught Somali girls to be proud of their natural skin," added Rashid Abdi, a political analyst on the Horn of Africa and the Gulf. She passed on at the time Somalia is struggling with novel Coronavirus pandemic.