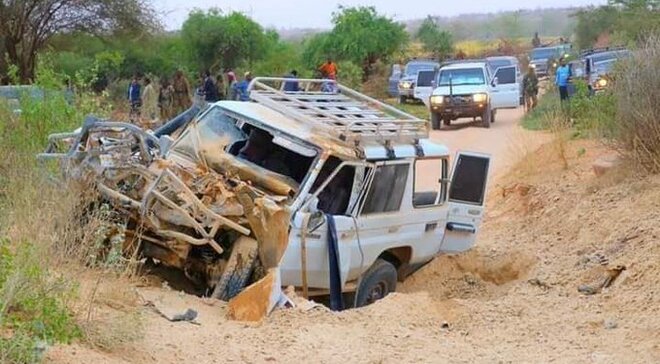 MOGADISHU, Somalia - A top Somali official survived an assassination attack on Sunday, officials confirmed, in an attack which almost coincided with a raid at an elite hotel in Mogadishu, a manifestation of deteriorating security structures within the Horn of Africa nation, which has been struggling with stability for decades.

Education minister Abdullahi Godah Barre survived from what officials have since termed as "assassination" attempt, following an IED explosion that targeted his convoy in Gedo, one of the most volatile regions within the Horn of Africa nation, which has been under persistent terror attacks.

The minister was traveling to the capital Mogadishu, following a series of meetings at Gedo, a region which has been the battlefield between Al-Shabaab militants and security forces, with elements of rivalry between government and regional security forces in Somalia.

According to Ismael Mukhtaar, the spokesperson of the government, the minister was slightly injured and has since been treated following the incident. Two people from his delegation were also critically injured but they've since been airlifted to Mogadishu for the treatment he added.

"Our education minister survived an attack narrowly after his convoy rode over an IED. Two people within his delegation were slightly injured and have since been airlifted to Mogadishu for advanced treatment," he said in a brief statement.

The spokesperson added that those injured were MPs who were accompanying the MP to the volatile Gedo region for a series of meetings, which involves the structuring of education ministry and the system within Somalia. The names of the MPs were not immediately revealed.

In recent weeks, the Gedo region has been one of the terror hotspots in Somalia and has the highest number of active military actions due to the huge presence of Al-Shabaab militants. There are a number of Kenya Defense Forces [KDF] troops, ENDF, and those from the Somali National Army [SNA].

The minister's survival came moments before an attack at an elite hotel within Mogadishu, which has since been claimed by the Al-Shabaab militants. The attack, officials said, was engineered by a car bomb blast which was followed by a series of gunshots by Al-Shabaab militants.

Abdirisak Abdi of the Ministry of Information and Dahir Ali of the defense ministry was confirmed to be among 10 people killed in the Elite hotel attack. Over 205 people, including the owner Abdullahi Mohamed Nur [MP], have been rescued, the government added in a statement.

Four attackers were involved in the melee which has since been confirmed by Al-Shabaab militants. According to government officials, the attackers were killed by elite security forces who intervened after four hours of the attack, which was the second in as many weeks within Mogadishu.

"Somali special forces end a 4 hours-long deadly siege at Elite hotel in Mogadishu after killing the last attacker," said Ismael Mukhtaar, the spokesperson, who also said that the attackers were armed with AK 47 rifles during the deadly raid.

Al-Shabaab militants have been targeting security forces during their endless attacks with top government officers also being their major targets. Several people including innocent civilians have been killed in the last decade from Al-Shabaab related incidents, details show.