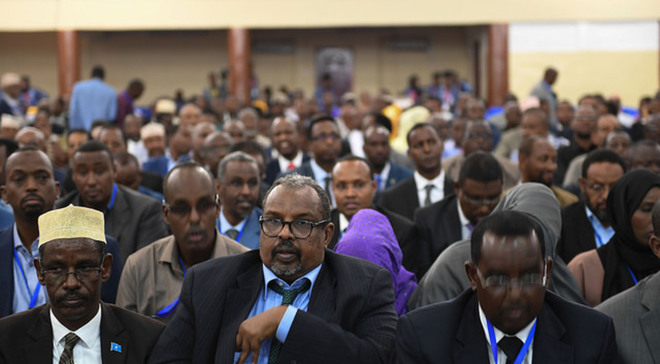 Federal parliamentarians argued that salaries for the new Upper House senators were not incorporated in the new fiscal budget.

But outgoing Finance Minister attributed the lack of salaries for the Senators to limited government resources amid crippled economy and persistent drought conditions.

However, following debates during the parliamentary sessions, Federal MPs have rejected the notion of economical downfall in the country and demanded to review government spending in 2016.

Federal Parliament stated the country receives substantial tax incomes from the Airport and seaport in Mogadishu of more than $ 11 Million.

“We [MPs] want  to review the government spending, and we know that salaries still not been paid for troops and civil servants in the past 7 months,” said MP Abdi Ali Ahmed, during a parliamentary session yesterday.

Ahmed said the Parliament will hold more debates on the new budget in the coming three months according to the Provisional Constitution.

He also stated that international donors-European Union and U.S.- support the government budget and pay the salaries of the national army, in addition to the $ 2 Million that is given to the Federal government.

“Seaport tax revenues estimate for $ 11 Million, also there is $ 2 Million cash support to the government from the donors and land tax incomes, we don’t know how the government spend its budget,” added Ahmed.

The new Federal Parliament demanded for further review into the government spending that is inconsistent with the income generated.

Somalia has inaugurated the new Parliament on last Tuesday, whereas the election of remaining MPs is ongoing for some regional clans. The new lawmakers are expected to vote for the new Speakers of Lower and Upper Houses and new President in January 2017.