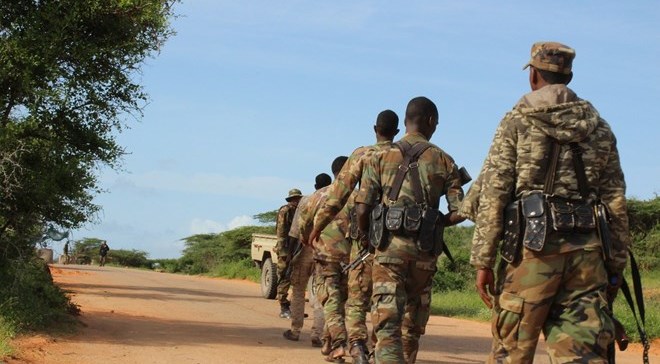 MOGADISHU, Somalia - Normalcy has been restored in the northeastern town of Mandera after a week of tensions, a top official said, putting to an end a possible diplomatic row between Kenya and Somalia.

Businesses came into a standstill in Mandera and it's suburbs after a vicious battle in Balad-Hawo, which also triggered communication breakdown. A number of health facilities and schools were also closed down.

In an internal memo on Monday, Mandera Governor Ali Roba however, confirmed that Jubaland forces had moved 7 kilometers from the town deep into Somalia, thus easing tensions.

All staff members were asked to report to work on Tuesday. Jubaland troops are said to have been harbored in the town by KDF, which works closely with Jubaland's leadership in the fight against Al-Shabaab.

“Jubbaland forces have moved at least seven kilometers out of town, slightly easing the tension but we continue to monitor the situation keenly,” Roba, who is serving the second term said.

Mr. Roba directed the County’s Efficiency and Monitoring Unit to carry out spot checks and take stock of all staff and services being offered to start Tuesday.

SNA troops have been pursuing Jubaland minister Abdirashid Janan, who is accused of "serious crimes" although Kismayo has dismissed such claims.

Farmajo, the regional leader added, "wants to establish a parallel administration in Gedo" to rival the Jubaland government against the spirit of federalism.

International partners led by the US asked FGS to "reduce the presence of SNA troops in Gedo" and subsequently, embrace dialogue with Jubaland to end the impasse.

After a series of retribution from both Somalia and Kenya over the Gedo clashes, President Farmajo agreed to visit Kenya soon following an invitation by President Uhuru Kenyatta. A delegation from Kenya visited Somalia on Sunday.

“We continue to encourage and appreciate the interventions led by President Uhuru Kenyatta and his Federal Republic of Somalia counterpart Mohamed Farmaajo,” added Governor Roba.

Janan, who hails from Gedo and a clansman of Farmajo, recently accused FGS of "intimidations and blackmail", adding that "they are pursuing me because I support Madobe".

Rashid Abdi, a security analyst, claims that Janan has since moved out of Mandera, and returned to Kismayo, the regional capital for Jubaland.

"Janan has moved to Kismayo, according to Jubaland officials. A significant development that has the potential to ease tension in the Mandera Triangle," he said in a tweet.

While the significant development cannot be independently verified, a resident of Mandera, who teaches in a vocational training school, told Garowe Online that "tensions have reduced."

According to the officer, who spoke in confidence, the KDF team "has taken over areas surrounding the border" and that both Jubaland and SNA troops "cannot be seen" within the vicinity.

The standoff between the two Somali troops raised tensions, with both Kenya and the US raising concerns over possible Al-Shabaab resurgence in Somalia.

Sources said the US, through the Ethiopian PM Ahmed Abiy, caused for dialogue between FGS and Kenya. Nairobi uses Jubaland as a buffer zone in the fight against Al-Shabaab thus the strategic interest in the region.