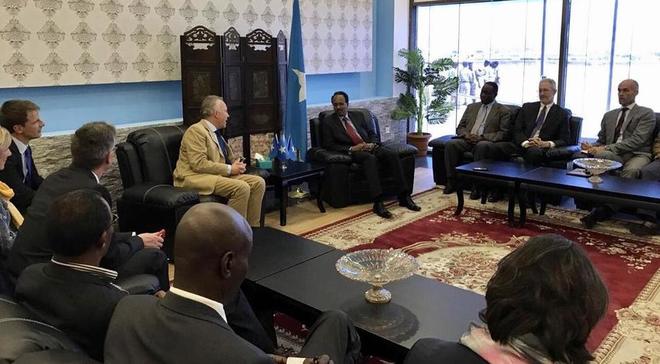 MOGADISHU, Somalia- The newly elected President of Somalia Mohame Abdullah Farmajo, held meetings on Thursday for the first time with representatives from the International community in Mogadishu, Garowe Online reports.

During the meeting, the international partners have congratulated Farmajo on his election as the President of the Federal Republic of Somalia on Wednesday in Mogadishu by the Federal Parliament.

The meeting was reported to focus on collaboration between the International partners and Farmajo's new government.

"We look forward to strong partnership in addressing the hopes and needs of the people of Somalia," UN's special envoy for Somalia Michael Keating said in a Twitter post following the hotel meeting.

The International community has called on the upcoming new Federal government led by President Farmajo to respond to the country’s worsening drought crisis and avert possible famine.

Farmajo, a former Prime Minister who holds dual Somali-US citizenship has been elected as the 9th President of Somalia by the newly sworn-in lawmakers in a secret ballot in Mogadishu on Thursday.

His election was overwhelmingly welcomed by Somalis in the country and abroad, as they celebrated with the country's army soldiers on the streets in the capital, and other major towns.