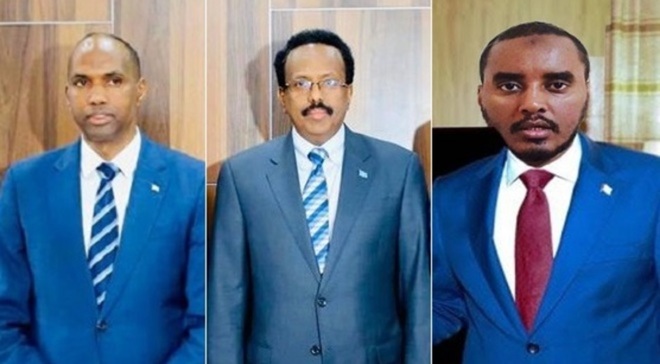 MOGADISHU, Somalia - An independent inquiry for alleged links between Somalia's spy agency NISA with Al-Shabaab militants should be unveiled, the Forum for National Parties [FNP] said in a letter to top officials among them President Farmajo, in yet another interesting twist that could define Somalia's political future.

The FNP, which is a conglomerate of six opposition parties under former Presidents Sharif Sheikh Ahmed and Hassan Sheikh Mohamud, confirmed the "authenticity" of a shocking report alleging clandestine activities between NISA and Al-Shabaab, further raising speculations about FGS commitment to fight against the militants.

In a letter also copied to the Speakers of Senate and Lower House, Somali Prime Minister Hassan Ali Kheire, and the Attorney General, FNP expressed "serious" concerns about the alleged cooperation between the two entities, which was first unearthed by National Intelligence Service [NIS] of Kenya.

NISA, the report alleged, provides intricate intelligence briefs to the Al-Qaeda linked group besides supporting its sophisticated attacks against the Kenya Defense Forces [KDF] soldiers, who are part of the AMISOM troops in Somalia.

Receipts of payments made NISA operatives to the Al-Shabaab were published in the report, which was first made public a fortnight ago. It's not clear why a spy agency to a sovereign state could sabotage operations of a friendly force helping in stabilization effort.

And the opposition team now wants individuals with "political agenda" kicked out of the agency for the sake of "embracing much needed" professionalism as part of "radical" measures towards reforming NISA. It didn't mention the names of those believed to be fueling political agenda.

In their place, the letter notes, "career" spy agents who were replaced by "figures with political agenda" should be recalled to revamp the agency, which has "lost its glory" due to political persuasions. The NISA operatives are mostly trained in Kenya.

Fahad Yasin, the head of the agency, has been the epicenter of unending squabbles between FGS and the opposition. Yasin, a former Al-Jazeera Arabic journalist, is accused of "using the agency as a political" tool in his quest to call shots on behalf of President Mohamed Abdullahi Farmajo.

Besides the alleged witch-hunt against opposition leaders, NISA has also been linked to arbitrary arrests, detentions, harassment, and execution of journalists in Somalia. The most recent tussles between the agency and renowned journalist Harun Maruf of VOA is perhaps the most publicized.

In a tweet last week, NISA claimed that "we've forwarded concluded investigations against Maruf and recommend for his prosecution". He's accused of being "danger to national security" by the authorities, who claim that he works closely with Al-Shabaab.

But Maruf's tribulations could be engineered by his debut Investigative Dossier program that airs on VOA, in which he has interviewed defectors of Al-Shabaab, who more often than not, link operatives within FGS to the Shabaab group, a move which might have angered the regime.

To exonerate NISA, the opposition coalition wants forensic audit done on phone calls made by the NISA operatives to the Al-Shabaab leaders and the use of suspected social media accounts by the agency for "personal" purposes.

In a rebuttal last week, the Somalia government defended NISA, terming the allegations "false and misleading". The report, FGS added, "was crafted by dark forces to spoil the reputation of an agency which works with strict adherence to professional ethics".

KDF has been at loggerheads with Somalia authorities due to its close ties with Jubaland President Ahmed Madobe, who signed a deal with his critics last week in Nairobi. The deal, analysts argue, "effectively ended" Farmajo's onslaught towards Jubaland administration.

While the Kenyan troops have made gains in the fight against Al-Shabaab by liberating strategic towns, the troops have also suffered setbacks, particularly in El-Adde and Kulbiyow during attacks waged by Al-Shabaab.

The Kenyan government is investigating the role of NISA in attacks targeting KDF.

In February, authorities in Nairobi arrested 12 MPs from northeastern Kenya moments after visiting Somalia, following reports that they held meeting with Yasin. The Kenyan government had banned the spy chief from traveling to the country.

Although it's not clear if FGS will succumb to demands from the opposition, the standoff could evoke retribution from international partners, a move that could further affect the government's operations.

A wheel dealer par excellence, Yasin has also been involved in endless boardroom deals with foreign nations to reconcile Farmajo with opposition leaders, although such duties are not part of his terms of service, further irking his critics who accuse him of being "too political".