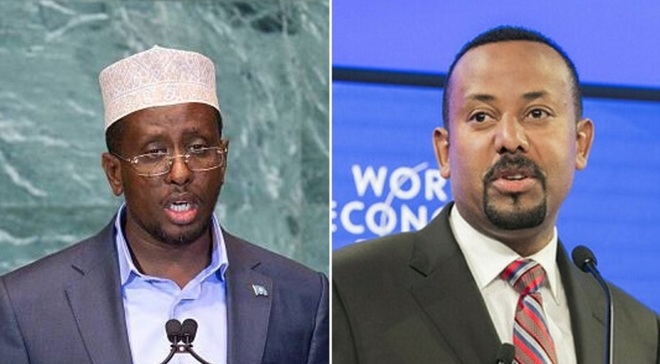 While underscoring tremendous expansion of democratic space in Ethiopia under Mr Ahmed, FNP regretted the involvement of Ethiopia in internal politics of the nation, adding that the move threatens integration.

"It's however with regret that FNP registers its grave concern about unfortunate violent involvement of Ethiopia in Somalia's domestic politics," read the letter.

FNP further stated: "The Ethiopian defense forces have been involved in illegal activities which undermines integrated in Somalia."

Further, the opposition raised concerns about the decision by ENDF to block Jubaland Deputy President Sayid Adan from visiting Gedo region last week, forcing him to abandon the journey.

"The VP avoided violent confrontations giving chance to diplomacy and friendly resolution to the matter," the noted, accusing Ethiopian non AMISOM troops of overstepping their mandate.

According to the opposition team, Ethiopian troops have constantly tried to influence electoral processes in Jubaland, a move which allegedly targets to overthrow regional President Sheikh Ahmed Madobe.

The opposition argued that "ENDF had attempted to interfere with Jubaland polls by sending commandos who attempted to land at Kismayo."

Since then, Madobe and Farmajo are yet to meet, despite pressure from international community to have them reconciling.

At South West State, FNP argues, Ethiopian troops worked in cohorts with the Federal Goverment of Somalia in December 2018 to 'impose loyalists' during the fiercely contested polls.

Mukhtar Robow, the former Al-Shabaab spokesman, was blocked from contesting leading to violent protests in Baidoa that cost lives of 11 people. The Ethiopian troops whisked him to Mogadishu where he was imprisoned .

Recently, FNP adds, heavily armed Ethiopian non AMISOM troops were deployed to Dhuusa-Mareeb, the capital of Galmudug state where they have been instructed to ensure 'victory' for predetermined candidates in the upcoming polls.

And now, the opposition coalition under the leadership of former Presidents Sharif Sheikh Ahmed and Hassan Sheikh Mohamud, wants Mr Abiy to intervene.

The opposition team insists that the Nobel Peace Prize winner should solve the stalemate 'in the manner that reflects new Ethiopia with great potential'.

"It's therefore that this matter receives urgent and kindest attention, trusting that you will intervene in the manner that reflects new Ethiopia with a great potential of playing neutral role geopolitical dynamics," the letter read.

Despite persistent pressure on Ethiopian PM Ahmed Abiy to respond to alleged incursion on Jubaland and other states, he's yet to respond. He's believed to be supporting Farmajo's policy in the state governments

Besides the pressure from Somalia, Abiy is also facing internal squabbles in Ethiopia, with ethnic violence leading to the death of over 100 people in the recent weeks.