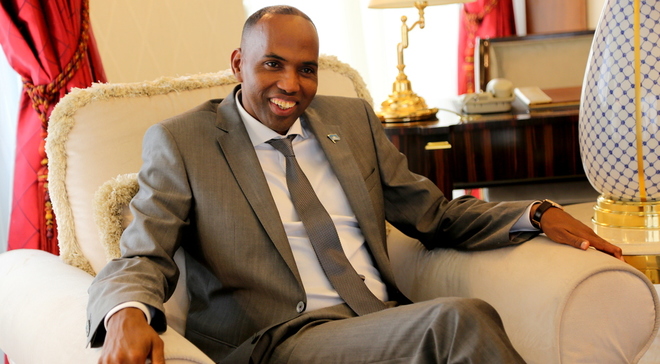 Yesterday, PM Khayre along with members from cabinet ministers and Federal Parliament have reached Doha city, after receiving an official invitation from the Qatari government to attend the Doha Forum.

The two-day Forum, under the banner “Development, Stability and Refugee crisis” is held under the patronage of Emir of Qatar. Leaders from African nations and representatives from international organizations are reported attending the meeting in Doha.

The conference will highlight on the political transformation at the international level, challenges of economical development, investment, the political and economic role in refugee crisis.

On the sideline of the Doha Forum, PM Khayre is scheduled to meet top Qatari officials to discuss bilateral relations, economy, security, rebuilding the Somali army and drought relief programs.

At the end of the conference, it is expected that nations will pledge support to the Somali Federal government to back its agenda to overcome challenges.

This comes following the conclusion of London conference in UK, that saw representatives from 40 nations and international organizations pledging support and signed security pact to help the Somali Federal government to enforce security, rebuild a national army to root out the al-Shabaab militants.

Qatar are among other Gulf states implementing humanitarian and development programs in Somalia, and its Embassy in the capital Mogadishu is overseeing projects donated by Qatari government.