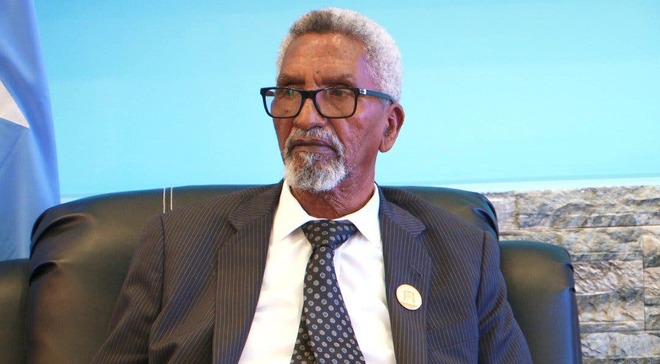 MOGADISHU, Somalia - The controversy surrounding the selection of Somaliland's electoral committee members continues to escalate with Senate Speaker Abdi Hashi now calling for intervention by the United Nations and the African Union, in the latest twist which could derail implementation of the pre-election deal within Somalia.

Somaliland's electoral committee team is set to conduct elections for the secessionist region with winners expected to join the rest in Somalia's Senate, even though the local administration of the breakaway region has rarely recognized such kind of arrangements.

In a tough-worded letter, Abdi Hashi, who hails from Somaliland, accused President Mohamed Abdullahi Farmajo of unilaterally appointing the committee without involving stakeholders from Hargeisa, who are supposed to oversee the elections in line with the country's provisions constitution.

In a letter dated November 13, 2020, Hashi argued that Farmajo's move "will have catastrophic consequences for the Somali people". And now, the speaker asks the UN and AU to ensure that Somaliland, just like all other Federal Member States, has the right to appoint its own committee and should not be dictated by anyone.

The veteran politician accused Farmaajo, his Prime Minister Mohamed Roble, and the head of the intelligence agency Fahad Yasin of "gerrymandering the process to select supporters to represent the North in the next parliament".

While noting that federal lawmakers from Somaliland safeguarded the unity of Somalia, Hashi added that "it is only fitting that the formation of the election committees for the Northern Somali Unionist MPs is formed under a consensus-based formula which is inclusive to all parties from the northern regions".

The speaker's remarks add to the increasing pressure on President Farmaajo to keep off the Somaliland issue. Eminent scholar Professor Abdi Samatar warned last week Farmaajo was fomenting a civil war in the manner in which he was handling the election issue.

Villa Somalia and security agents are conniving and these mistakes could result in a civil war,” said Professor Samatar. “What’s happening,” the university don and political activist said amounted to “political rape.”

Last week, at least twelve presidential candidates and opposition parties also protested the move by Villa Somalia calling on the president to rescind his decision. Some of them included former Presidents Sharif Sheikh Ahmed and Hassan Sheikh Mohamud along with former PM Hassan Ali Khaire.

Farmajo is facing an election quagmire with the opposition strategizing for a possible coalition against him. Somaliland claimed to have seceded from Somalia in 1991 but Mogadishu has often dismissed the matter, arguing that the region remains her territory.