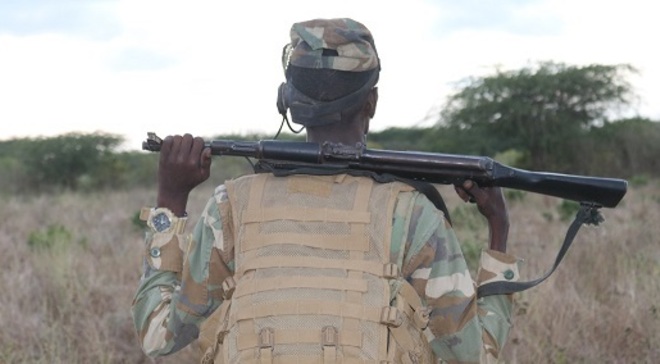 MOGADISHU, Somalia - In the second week of intensive operations at Lower Shebelle, Somalia's Special Forces captured the fourth top Al-Shabaab operative, officials said, tipping at the capability of the army in a country that has struggled for relative stability.

A press statement from the ministry of information, culture and tourism revealed that troops selected from Danab forces on Monday raided the vicinity of Wanlaweyn, southern part of Somalia, and managed to capture the commander.

The operation was executed by the team from 1st Danab Advanced Infantry Battalion, which was first to be trained and commissioned by the US Africa Command, the statement read.

The troops, launched a "massive operation" which resulted to the capture of a "high profile" Al-Shabaab fighter, who had been "coordinating" attacks against AMISOM and SNA forces in the region, officials said.

Later, the militant was identified as Ibrahim Mohamed Rooble, tax collector for Al-Shabaab within Lower Shebelle, who also serves as Amniyat, a term given to intelligence wing of the Al-Qaida linked group.

Unlike in previous outings, the troops raided the town at night, in an operation which is yet another "huge success" among the SNA soldiers, who are set to assume security responsibilities next year upon AMISOM's exit.

"Danab entered Wanlaweyn at night using cover to close on the target. This ensured surprise and prevented the escape of the terrorist," added the statement in part.

"Conducting operations at night is one of the toughest job for the military. The successful operation manifests the capability of the Danab forces to conduct complex operations."

The US, which is the sole sponsor of the Danab forces, lauded the team's latest achievements, yet another indication of satisfaction which the elite troops have managed to showcase to Washington DC in fight against Al-Shabaab.

"Congrats to the @KowDanab for your successful operation and capturing of a senior AS member! Isku Tiirsada!" the US embassy in Somalia said in a tweet on Tuesday.

Significantly, the capture of Rooble comes barely three days after SNA reported seizing of three other top commanders last week at Janaale, another notorious town which had hosted Al-Shabaab for several years before its liberation.

Hassan Suleyt alias Hassan Ganey was arrested and bundled into the military tracks and will be interrogated to give a synopsis of Al-Shabaab operations, Abdihamid Mohamed, the SNA force commander had said.

He had been arrested along with two others, with one identified as Mohamud Yussuf Mansur, who until his apprehension, was the head of explosives brigade in Lower Shebelle. Suleyt was in charge of Amniyat in the region, officials said.

“The military raided his hide out and found the man and two others, they were taken into custody. We are currently interrogating them,” said the veteran SNA commander.

Lower Shebelle has been the hotbed of Al-Shabaab terror activities. The militants have been imposing Zakat on locals to sustain their illegal activities, inviting the government's wrath through the military in recent weeks.

But in the process of liberating several towns along the region, the Somali Army has paid a huge prize. For instance, over 20 soldiers were killed by the militants at El-Salini military base, not far from Janaale in Lower Shebelle.

Even in the middle of the uncertainty, FGS insists that "security forces are pursuing the craven terrorists group of Al-Shabaab which conducts cowardice attacks and intimidate innocent civilians in Somalia."

For over a decade now, Al-Shabaab has been fighting to topple the fragile UN-backed Somalia government, although they lost control of the capital, Mogadishu in 2011 after an operation by AMISOM and SNA troops.

Since then, the which which was termed as "dangerous" by the US, has been carrying out sporadic attacks both in small and large scale. Over 4,000 civilians have died in the process.