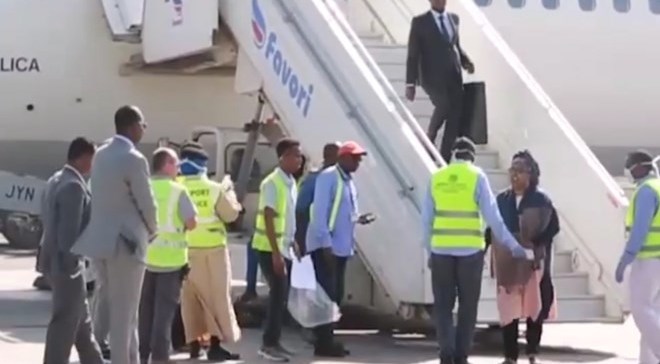 Khadija Mohamed Diriye has skipped the mandatory testing after jetting in from Cairo, Egypt's capital on Tuesday, sparking outrage from among Somalis on social media.

As part of the preventative approach, the ministry of health had ordered for the screening of passengers at major airports due to Coronavirus pandemic, officials said.

But in a press conference, the minister, whose actions had backlashed in her own country, defended her actions, insisting that "no wrong" was committed.

"I don't think I violated any procedure. No crime was committed," Ms. Diriye said, in a statement that could further put her conduct into question and probably throw her out of balance.

Since it's an outbreak in the Chinese city of Wuhan, the virus has left over 2,700 people dead, with over 80,000 already infected, WHO said.

But the minister, who is pivotal in President Mohamed Abdullahi Farmajo's administration, termed jibes against her "unnecessary and misplaced" in her rejoinder.

Further, she noted with defiance: "No need for airport health screenings for coronavirus as there is no confirmed case in Somalia."

In Africa, Algeria and Egypt became the first countries to record coronavirus incidents. Since then, Nigeria has also become the first Sub-Saharan country to record a positive incident, reports indicate.

But East Africa, whose risk rate has been identified by WHO as "worst", is yet to record an incident according to reports by various health departments.

Ms. Diriye was aboard a Turkish airline plane, and it's unclear if Somalia would take precautions by banning flights from countries that have recorded cases of airborne disease.

However, in neighboring Kenya, tensions have seized the country, following disembarking of a China Southern airline plane on Wednesday, which had 239 passengers aboard.

For the better part of Thursday, the health department spent time battling "negligence" claims in Parliament, although the government is yet to issue official positions.

Both Kenya and Somalia have very limited capacity to handle Coronavirus outbreak, given their impoverished infrastructure and equipment, analysts say.

For instance, Mogadishu and Nairobi have not been able to devise mechanisms to fight locust invasion, which have destroyed acres of plantation, FAO noted.

China has blocked all activities in Wuhan city, with hundreds of people still stuck in the country, including students from different nations among them Somalia.