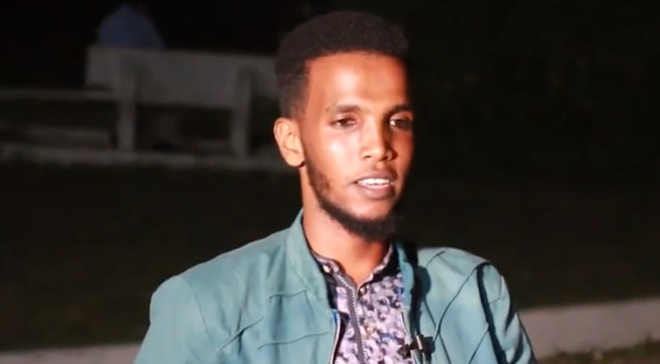 MOGADISHU, Somalia - A top artist based in Somalia has been arrested over links to Al-Qaida associated group, Al-Shabaab, the spy agency said, adding that he was aiding in intelligence and finances".

NISA, the agency in charge of gathering intelligence for security purposes, posted the video of the suspect confessing on Twitter.

Tuesday's shocking incident reflects the deep networks of the terrorist group, which has mayhem, hacked and executed dozens of people.

The singer was in charge of finances

Abshir Ahmed, NISA said, confessed being an Al-Shabaab operative, who has been helping the group with intelligence besides funds.

The spy agency described Mr. Abshiir as "a talented musician with a golden voice" whose dreams were shuttered by joining the terror group.

In the video, the youthful singer is heard saying that "I have been a member of Al-Shabaab and I was in charge of intelligence and finances."

The suspect, NISA said, has been a member of the famous Benadir Band. He is being detained for further questioning by the government.

But the puzzle which Somalia and her allies will be solving is the rate at which professionals are being linked to the deadly terror group.

Although the group has almost vacated the capital Mogadishu, it still enjoys dominance in central and Southern Somalia, UN report said.

Of the professionals who have been convicted for links to Al-Shabaab are among others, a college teacher, a former MP and a District Commissioner.

Mohamed Ahmed, a college teacher, was condemned to the death penalty by a military court in Mogadishu early this year. He was linked to several high profile terror attacks.

The arrest of the talented singer comes just a day after an Investigative Dossier revealed defection of a top foreign fighter from Al-Shabaab.

Zubair al-Muhajir, a Briton whose native is Ivory Coast, surrendered to military officials last year. He was one of high ranking Al-Shabaab officials.

Before his defection, he said, he had been arrested by Amniyat, the Al-Shabaab intelligence group and imprisoned for three years.

"I defected because al-Shabab, they are lying to the Muslims and to the world,” he said.

“They are claiming to implement the Sharia (Islamic law) which is not true because I know from incidents where they went against the Sharia.”

Al-Shabaab militants have been depending on mafia-style taxation to sustain her activities, a move that the UN is keen to eradicate.

NISA's major success in nailing the undetectable members of the society who secretly work with Al-Shabaab could aid in the fight against terrorism.

Last year, the agency came under fire from opposition leaders who accused it of "gross incompetence and inability to protect Somalis".

The group had linked a foreign country to the deadly Mogadishu attack in December, which left over 90 people dead.

But shortly after the claim, Al-Shabaab responded by taking responsibility, adding that "we targeted a Turkey convoy but missed the target."

The spy agency has often been accused of also meddling in politics, with its boss Fahad Yasin, often being linked to a witch-hunt against the opposition.