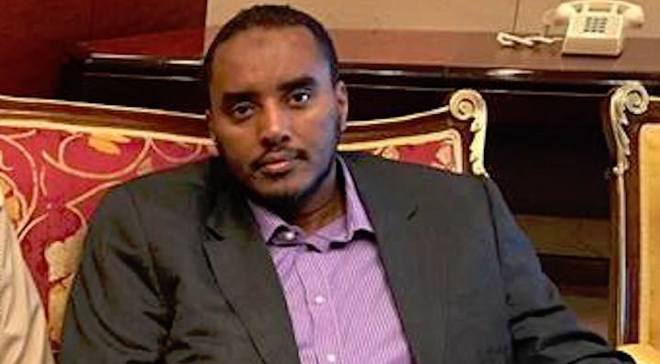 MOGADISHU, Somalia - A storm is brewing in Mogadishu which could put the Federal Government and the opposition at loggerheads and probably test the integrity of a free media, Garowe Online reports.

At the center of the latest intrigues is the Director of National Intelligence and Security Agency Fahad Yasin Dahir, who secretly held a meeting with media managers and editors on Tuesday night.

The last Tuesday’s night meeting was organized by the Director of Communications at the office of the president, Abdinur Mohamed Ahmed, also a former journalist, it has now emerged.

Initially, the media team was told that they were to meet the minister for information, only to find the spy chief waiting in the hall where they had been summoned to.

“Our cell phones and cameras were collected before the meeting started. We were told that the discussions will be off-the-record,” a director who attended spoke in confidence, adding that “To our shock, the Director of NISA entered the meeting hall.”

The spy chief reportedly asked the media to be 'favorable' to the government by censoring certain critical information, a move believed to be a strategy to gag the media.

Instructively, the spy chief insisted that the media should focus on the positives, an indirect warning to journalists who execute their watchdog roles by making the government accountable through investigative reporting.

“He gave us a message that we were supposed to be part of the system not against it. Nobody could question him or say no to him,”

“We are not sure how we can continue operating as an independent media in Mogadishu. I now fear for the safety of my journalists and my media,” a radio editor expressed fears after the secret meeting.

Also targeted in the latest warning from the spy chief is the increasingly robust opposition team. The media team was asked to 'reduce coverage on the opposition activities'.

The move, the spy chief reportedly said, would allow the government to focus on delivering to the public without necessarily getting 'distracted by the opposition'.

Media independence in Somalia has become a subject of debate in recent weeks with dozens of journalists getting harassed, arbitrarily arrested and some tortures under unclear circumstances.

Two days after the secret meeting, the opposition team unveiled manifesto under the umbrella of Forum for National Parties (FNP) under the leadership of former President Sharif Sheikh Ahmed.

Somalia will be electing new MPs and President after the term of the current parliament expires in October 2020. President Mohamed Farmajo who is portrayed as a divisive figure by his critics will be seeking a second term

In a statement on Thursday, the FNP questioned the Federal Government's alleged violation of human rights and unwarranted witch-hunt targeting regime critics.

"This is a step to the right direction that will contribute to the process of political democratization of Somalia with a goal of safeguarding the country's integrity," read the statement.

"In retrospect to current political trends in which the president and the executive wing of government have blatantly violated basic principles of the constitution, FNP is concerned with the current trends."

Among the key issues in the coalition's manifesto are; the unity of the nation and the people, the supremacy of the constitution and completion of the review process, safeguarding fundamental rights of citizens, inclusive political representation.

Others listed as fundamental priorities for the coalition include; elections, security, protecting, safeguarding and strengthening the federal system.

Farmajo's attempt to gag the media could now degenerate into a tug of war with the opposition and possibly, invite reprisals from the international community.

Somalia has struggled to regain peace and stability for three decades now, leaving the United Nations with a difficult task of restoring normalcy. Farmajo's 'difficult' relationships with his predecessors and regional presidents have further irked tensions in the Horn of Africa nation.