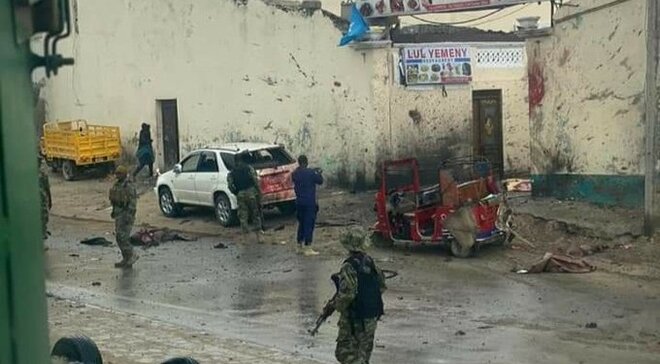 MOGADISHU, Somalia - Three people died on spot on Monday noon in Mogadishu after a suicide bomber unleashed in a city hotel, a top government official confirmed, in the latest attack targeting the Somalia capital, which has been enjoying relative peace since 2011 after the capture from Al-Shabaab.

Ismael Mukhtaar, the government spokesperson, said a suicide bomber targeted a frequented restaurant in Mogadishu before detonating explosives, which left two people dead. The other casualty was the bomber himself, he said.

According to Mukhtaar, several people were injured during the melee, adding that they have since been taken to a Mogadishu hospital, where they are recuperating. The government spokesperson did not give further details in relation to the attack.

"We've lost two civilians this afternoon after a suicide bomber attacked a city hotel. The bomber also died on spot. We have taken those who were injured to a Mogadishu hospital where they are being treated," the official said, adding that: "We shall give further details later for public consumption."

The spokesman further said that security officers have been mobilized and were investigating the incident. The officers, he said, will arrest those linked to the attack and arraign them in court for prosecution, adding that "we cannot spare rogue elements in our country".

The explosion took place near heavily fortified Mogadishu Central Prison, a move that will further raise questions about the competence of security officers operating in Mogadishu, which is one of the best-secured towns within the war-torn nation. The town enjoys upscaled security from foreign troops.

Eyewitnesses told Garowe Online that the bomber tried to make his entry into the Lul Yameny restaurant, take a seat with other diners, and then set off the explosives tied on his waist, but he was prevented by a security guard at the entrance gate. The explosion dismembered the parameter of the restaurant, besides injuring several people.

At the scene, the bloodstains wall eclipsed the hotel beside the debris resulting from the impact of the explosion. Al-Qaeda linked group, the Al-Shabaab, has since taken responsibility for the attack but did reveal the main target for the attack was security officials and soldiers at the restaurant.

The group said: "Our team carried an operation within Mogadishu this afternoon. We can establish that 9 people died and wounded 14 others." Usually, the group targets government officials, sympathizers, security forces and foreigners, and it has often dismissed assertions that the attacks usually target civilians.

Monday's attack comes barely 48 hours after a senior government official was killed by the militants in southern Somalia. Police reports indicated that gunmen attacked the compound of a District Commissioner in southern Somalia, in an attack which also left his child badly injured.

Al-Shabaab militants have been flushed out of Mogadishu in 2011 following a concerted effort by African Union Mission troops and those from Somali National Army [SNA]. However, the group has been launching small to large scale sporadic attacks across the country and within the town.

Somali security forces are preparing to take over security responsibilities in 2021 when the AMISOM troops will be leaving. In June, however, the US military said SNA and the Somali police do not have the capacity to handle violent extremism, a move that could further force international partners to find a lasting solution.