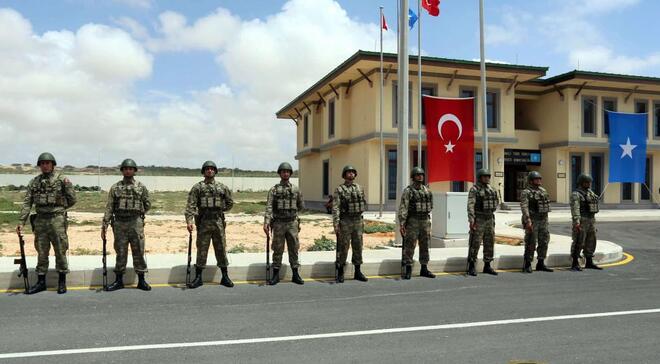 MOGADISHU, Somalia - A suicide bomber detonated himself outside the Turkish military base in Somalia on Tuesday morning, a top official said, in an attack that left at least two people including a pedestrian dead.

The incident at Camp Turksom is among the latest series of attacks targeting security forces in the Horn of Africa nation, which is struggling to rebuild after almost three decades on the instability that is fueled by endless threats by Al-Shabaab militants.

According to eyewitnesses, a suicide bomber who disguised himself as a recruit blew himself at the military academy after managing to join the queue that was building up outside the base.

The attack left a pedestrian and the suicide bomber dead, witnesses said, with a cadet from the military base, which is responsible for the training of Gorgor troops, also suffering massive injuries. The bomber maneuvered to the heavily fortified base undetected.

Camp TURKSOM was built in 2017 by the Turkish administration and is located in the Jazeera area, south of Mogadishu. Documents shared in Turkish parliament indicate that the facility cost taxpayers about $50 million.

The Jazeera beach is about 5 kilometers from Aden Adde International Airport, which also shares bases with the heavily fortified Halane Base Camp, home to many diplomatic missions and African Union Mission in Somalia.

According to sources, the Turkish mission in Somalia has been recruiting youths into the army in recent weeks and the attacker seized the opportunity to unleash. The government of Somalia had signed mutual cooperation with Ankara including strategies on fighting Al-Shabaab militants.

Ismael Mukhtaar, the spokesperson for the Somalia government, confirmed the attack on his official Twitter account, adding that guards had confronted the bomber moments before he blew up, leaving several other people injured.

"He pretended to be a trainee at the Turkey-Somali military academy but was shot and exploded outside the camp, killing himself and two civilians," Mukhtaar said, although it's since been established that only one civilian died.

Further, Mukhtaar said that no soldier or Turkish national was killed or injured during the attack. Until now, no group has yet claimed responsibility for the attack, but Al-Shabaab militants have been known to conduct attacks in the East African country.

Al-Shabaab has claimed responsibility for the attack, according to a statement posted on its affiliated websites.

The Al-Qaida linked group has also been targeting Turkish nationals in Somalia, who are key in improving the country's dilapidated infrastructure. In December 2019, the militants took responsibility for the bomb attack that left 90 people dead, among them two Turkish nationals.

In a statement, the group apologized to the civilians who were affected, adding that their fighters targeted a Turkish convoy but the bomber did not hit the target. The group has been fighting to topple the fragile UN-backed Somalia government, which enjoys the support of Ankara.

Turk-som is one of the largest overseas military bases in Somalia after the Balligodle army base, which is run by Americans. While the latter trains elite Danab troops, Turksom trains the Special contingent known as Gorgor.

Both troops are actively involved in the fight against Al-Shabaab are responsible for ongoing operations across the country which have led to the capture of several strategic towns in Lower and Middle Shebelle regions.

A day later, a suicide bomber almost ran into a military base at Ba'adweyn in the Mudug region within Middle Shebelle, which left dozens of soldiers dead. There have been several attempts by the Al-Shabaab targeting military bases, including the February incident at El-Salini where close to 25 SNA soldiers were killed.

Last year, the Somalia-based militants also tried to ambush soldiers at the Balligodle army base but they were all killed by hawk-eyed security forces. But in January this year, they managed to kill three Americans at Manda Airfield, which hosts elite Marines from the US in Kenya.

The scene has since been secured by military troops from both Turkey and Somalia. The Turkish mission in Somalia was yet to issue a statement by the time this report was compiled.