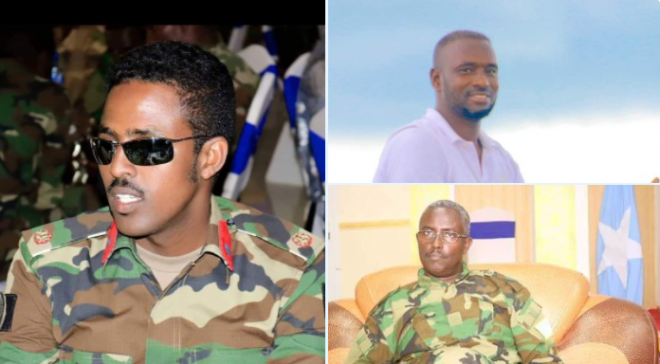 GALKAYO, Somalia - Top commanders with the Somali National Army [SNA] are among at least 17 killed in an Al-Shabaab attack at Galkayo city in central Somalia, officials have confirmed, in the latest deadly attack that targeted innocent civilians, amid a crackdown against the militants.

General Abdiaziz Abdullahi Qoje, the commander of the 21st Division of the Somali National Army, was caught in the unfortunate explosion and was among the 17 people who died on spot, following the bomb blast which targeted security officials and innocent civilians.

Also killed in the unfortunate explosion was the commander of the Danab Special Forces 10th Brigade Major Mukhtaar Abdi Aden, who had been leading operations against the Al-Shabaab militants in central Somalia, especially in the Middle Shabelle region.

Major Abdi Aden died at the time the Danab Special Forces were on the frontline in defeating Al-Shabaab in keys regions ahead of SNA's take over of the security functions in the Federal Republic of Somalia in 2021 when the African Union Mission Forces leave the war-torn nation.

Multiple sources indicated that the militants, who took responsibility for their social media sites, targeted a stadium in Galkayo, where the newly elected Prime Minister Mohamed Hussein Roble was to visit. The PM had not arrived at the scene according to eyewitnesses.

Since Wednesday, Roble has been in Galmadug in his ongoing state functions after leaving Puntland last weekend. He is persuading regional leaders to support the ongoing preparations for the country's parliamentary and presidential elections, which are yet to kick off.

Although the Al-Shabaab militants did not indicate their immediate target in the bomb blast, they have been fighting to topple the fragile UN-backed Somalia administration, which has been in place in as many years, and which the international community recognizes globally.

The terrorist group which was designated by both the United States and the United Nations controls large swathes of rural central and southern Somalia, where the security forces have always struggled to control, despite relentless efforts to do so.

Those who were injured in Friday's visit have been rushed to different hospitals across the country. The attack comes at the time the country is facing a stalemate in the preparations for the 2020/21 polls, which are yet to kick-off due to internal political wrangles.

Both President Farmajo and PM Roble have condemned the terrorist attack and sent condolences to the families and friends of the dead and wished a speedy recovery for the wounded.