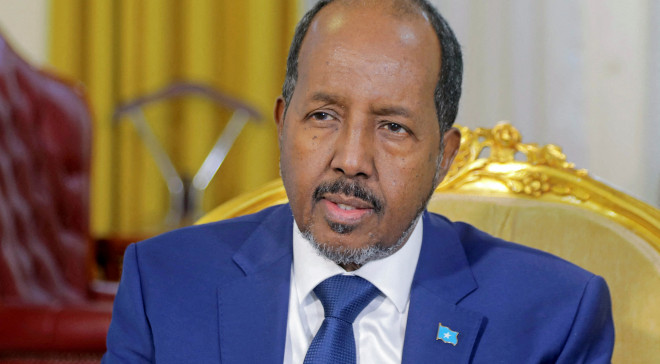 Somalia's President Hassan Sheikh Mohamud speaks during a Reuters interview inside his office at the Presidential palace in Mogadishu, Somalia May 28, 2022. REUTERS/Feisal Omar/File Photo

MOGADISHU, Somalia - After months of tussles from the previous administration, President Hassan Sheikh Mohamud has reportedly approved the controversial oil deal, which could raise questions about the agreement, which could further trigger political tensions in the Horn of Africa nation.

Villa Somalia noted that at least five amendments were done to the deal which was first signed by former Petroleum and Natural Resources minister Abdirashid Ahmed and the Coastline Exploration company Chief Executive Officer Richard Anderson.

The deal, whose details were leaked, was quickly disowned by then President Mohamed Abdullahi Farmajo and Prime Minister Mohamed Hussein Roble, but sources maintained their decision to distance themselves from the deal was guided by the politics of that time.

The latest adjusted deal is yet to be made public and the content could potentially raise questions from a number of stakeholders and experts. Somalia is optimistic that exploration of oil would significantly boost her diminishing economy

Early this year, the company CEO Richard Anderson dismissed the interpretation of the government on the legality of the agreement when the details leaked to members of the public. The government had distanced itself but Abdirashid Ahmed maintained all parties had reached an agreement.

"I won't go into the legal details of the analysis, but we believe quite firmly that our PSAs [production-sharing agreements] we signed are legally valid and that they're in full effect," he said in an interview with Voice of America [VOA] at that time.

VOA asked Anderson why the company ignored the Somali president's decree and a letter from a joint parliamentary committee on natural resources that instruct government agencies not to enter agreements during the election period.

"We did not ignore anything," Anderson said. "Before we signed the PSAs in February, we consulted with the ministry and with the SPA [Somali Petroleum Authority], and we were assured that both the president and PM were aware of the process and they were fine with the signing."

However, the CEO admitted that the company had not directly communicated with the former president and his PM but maintained Ahmed had assured the company that the top leadership was pretty aware of the agreement, thus the decision to approve it.

In an interview with VOA in February, Ahmed said the president knew about the signing, but the presidential palace denied his claim. Providing details of the agreement for the first time, Anderson said it was a "fair deal" for Somalia.

"There is a 5% royalty that comes right off the top. Profit is split 50-50. There is a 30% income tax on whatever profits the contractor — i.e., Coastline — makes," he said. There are various other financial benefits for Somalia in the agreement, he added.

The CEO said terms of PSAs including profit-sharing percentage, are fixed for its 30-year term and will not change during the life of the contract. Somali oil experts criticized the agreement. Jamal Kassim Mursal, former permanent secretary of the Somali Petroleum Ministry, said the agreement was "unfair."

In 2021the Somali government was warned of entering oil agreements by the Financial Governance Committee [FGC] a group of experts comprising the Somali Finance Minister, parliamentarians, and a member of the World Bank.

In an advisory, the FGC said it identified two main concerns in the government's approach to oil and gas contracts: in complete compliance with the government's legal framework, and inadequate protection of the state's financial interests.

"Incomplete compliance significantly raises the risk of future legal and/or compensation claims against FGS [Federal Government of Somalia], while inadequate protection of FGS's financial interests risks poor value for money over the lifetime of awards that may last for 40 years or more," said the advisory obtained by VOA. The signed agreement was for 30 years.

"I want to tell everybody upfront that we are not corrupt. We don't need to be corrupt," Anderson said. "No Somali government official has ever asked me to make any kind of illegal payment. It has never happened. I would also like to stress that no Somali politician is a shareholder of Coastline. We are independent of the government."

He confirmed that Coastline paid for the flights to Istanbul and hotels for members of the Somali delegation, who flew to Turkey to sign the agreement.

"I want to make very clear before we do anything and pay anything that has anything to do with anybody in the government of Somalia, it's always reviewed by our anti-bribery and corruption council before we make any such payments or any such commitments," Anderson said.

"This was reviewed by them, and they determined that it was, you know, that it was fine under U.S. law and under Somali law, again out of convenience."