The election of Somaliland MPs in Lower House will start Nov 1, says SEIT 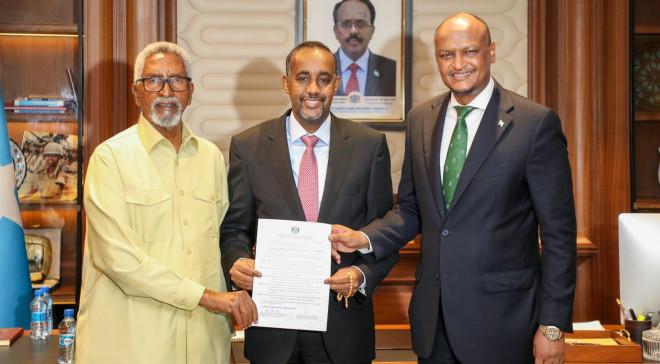 MOGADISHU, Somalia - The election of the Lower House seats of Somaliland in the coming Somali Federal parliament will commence on Monday, November 1, SEIT announced after long delays due to the political crisis in the country.

Somaliland's top politicians in Mogadishu Mahdi Guled, the deputy PM, and outgoing Senate speaker Abdi Hashi released procedures for Lower House elections on Saturday, paving way for the last process of the long electioneering exercise, which has dragged on for almost 12 months.

Guled is running for one of the first seats to be elected on Monday and he is expected to win due to his influence in the whole election process and his power over the selection of the delegate list.

Somalia was set to go for elections in December 2020 but the process has been delayed due to internal wrangles pitting outgoing President Mohamed Abdullahi Farmaajo and several opposition leaders.

The Somaliland caucus issued conditions for Lower House elections on Saturday, in what probably kick-starts the long electioneering Lower House exercise. This exercise is set to be rolled out in all other wards across the country.

According to the terms of the election, a candidate must not be less than 25 years of age, have not been deprived of citizenship in the last five years, and have not served a jail term within a similar period. One must also hail from Somaliland.

For candidates who are not either outgoing parliamentarians or members of the executive will need to provide a certificate of good conduct from the police.

Candidates who are currently serving in the public service, disciplined forces, or diplomats must submit their resignation letter to the Somaliland Indirect Elections team [SIET] seven days before the elections.

Voting will commence when there is a quorum of two-thirds of the delegates which translates to 76 out of the 101 delegates. The Somaliland SIET is expected to announce the electoral timelines in the coming days.

It's anticipated that by the end of this year, the Lower House polls would have been concluded to pave way for presidential elections. Outgoing President Mohamed Abdullahi Farmaajo and former Presidents Sharif Sheikh Ahmed and Hassan Sheikh Mohamud are set to face each other.