The people of this country can't be suppressed, ex-president tells Farmajo 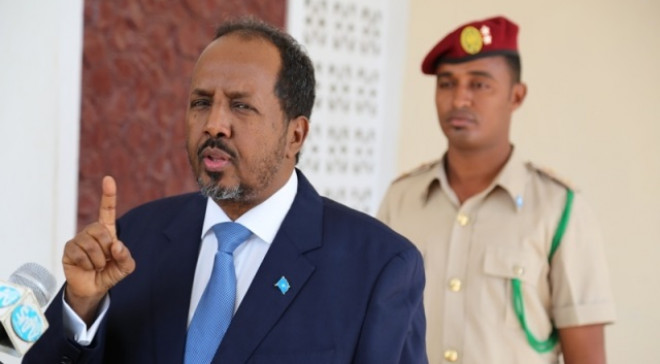 MOGADISHU, Somalia - Former Somali President Hassan Sheikh Mohamud has accused Farmajo administration of suppressing the people and the critics through the use of the police, following protests against his administration in Mogadishu, the country's capital on Tuesday.

Hundreds of opposition supporters had thronged into the streets of Mogadishu, calling for "free and fair elections" but they would later be dispersed by the armed forces, who had been deployed in various streets by the Federal Government of Somalia.

But Mohamud, who is the immediate former president, insisted that the government had misplaced priorities, arguing that intimidations and harassment of innocent civilians by the use of the army was "backward and primitive" besides being against the constitution.

According to him, the majority of those who were confronted by the security forces were dissatisfied with government attempts to rig the upcoming polls. The president is facing a re-election debacle and would know his fate by February next year should elections take place as scheduled.

"The people of this country can't be suppressed, those people who were on the roads Tuesday, protesting against Farmaajo are those who took to the streets to celebrate his election victory on Feb 8, 2017," said Mohamud while condemning the violence meted on civilians by the authorities.

At least four protesters have been wounded and more than that number detained by Turkish-trained Somali forces deployed on the streets during the anti-government rally on Tuesday morning. Mohamud slammed the arrests unlawfully and called for the release of the detainees.

He added: "The rule of law must be protected and the government should always respect the rights and freedoms of people. We shall not sit and watch someone violating the constitution he swore to protect. It's our duty to call for accountability."

The opposition supporters accused Farmajo of plotting to rig elections by installing NISA agents, civil servants, and his loyalists in the Electoral Committee, which has formed the basis of the current delay of parliamentary polls which were set for early December.

Farmajo who has 54 days to remain in office will face a strong united opposition 14 presidential candidates, including former presidents, PM and ministers united under one umbrella.