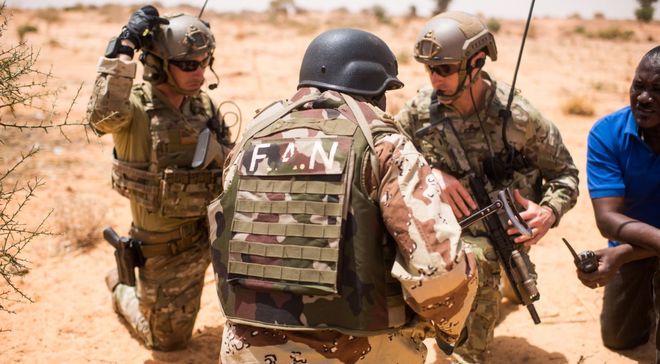 MOGADISHU, Somalia - A US-Somalia coordinated airstrike killed three Al-Shabaab militants on Sunday, AFRICOM has said in a statement, in the latest onslaught targeting the insurgents.

US-trained Danab forces had been confronted by the Al-Qaida associated group near Bangeeni before the aerial aid by the US military, AFRICOM added.

Al-Shabaab militants have continued to cause havoc within and outside Somalia, despite the fact that they have greatly been degraded by security forces.

For instance, the group killed at least 90 people in Mogadishu last month, in an attack that claimed that "we were targeting a foreign convoy".

AFRICOM insisted in a statement that it will continue to partner with AFRICOM and Somalia forces to upscale security in the war-torn nation.

Gayler, the director operations added: "Al-Shabaab consists of terrorists and criminals who seek to export hate and violence more broadly."

AFRICOM is committed to supporting our Somali partners and the security progress together we are building in the region, he said.

No civilian was killed

The initial assessment concluded that three militants were killed during the raid at the southern part of the country, which has been earmarked as a terror hotbed.

Currently, AFRICOM said, "we assess no civilians were injured or killed as a result of this airstrike."

Previously, such airstrikes have wrongly targeted civilians, raising questions about their accuracy and safety of the innocent populations.

UN report recently blamed the US and SNA for "hitting wrong targets thus causing confusion among members of the public."

Ahmed Omar, the fugitive Al-Shabaab leader, was also quoted in a viral video condemning the US for "killing our people through unprecedented airstrikes".

The US continued support for Somalia

The U.S., by virtue of our capabilities, influence, and credibility, is uniquely postured to support Somali efforts, including to help coordinate other international partner engagement.

Al-Shabaab poses a direct threat to Americans, our African partners, international allies, and U.S. interests in the region, AFRICOM said.

At least 500 US soldiers are stationed in Somalia and have been training SNA besides helping in coordinating sophisticated operations.

But the number could be drastically reduced should Pentagon's recommendation go through as Donald Trump plots to cut spending.

Al-Shabaab militants remain a major threat towards integration in East Africa, a move that has often worried Washington.

For instance, the terror group killed three Americans in a US Naval Base in Kenya early this month, further raising security concerns.

Ali Dhere, the group's spokesman, said "we shall continue attacking Kenya as long as it harbors US interests. They must withdraw troops from Somalia."

However, General Stephen Townsend, the AFRICOM commander, said that "we shall not allow them to attack our partners. We shall flush them out".

For 12 years now, the Al-Shabaab militants have tried to topple the fragile UN-backed federal government in Somalia, meeting resistance in the process.