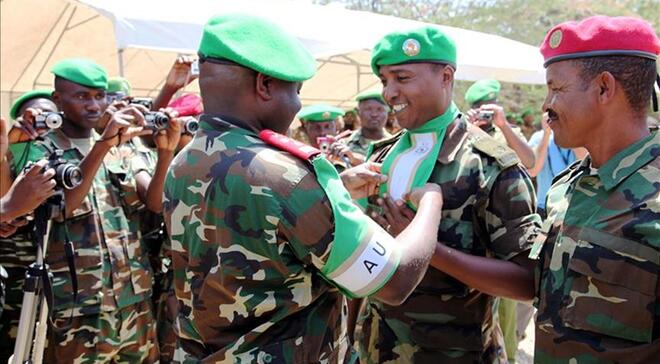 MOGADISHU, Somalia - At least 200 Tigrayan officers serving in the Ethiopian National Defense Forces [ENDF] have had their guns confiscated amid the ongoing war in the Tigray region, a move which could further lead to several questions on the stability of the African Union Mission Forces in Somalia.

There are a host of Tigray officers in ENDF who were deployed to Somalia to help in peacebuilding, but their presence could be compromised due to ongoing offensive by the ENDF in their Tigray backyard, following differences between the Tigray People's Liberation Front [TPLF] and the Ethiopian National government under Abiy Ahmed.

The Foreign Policy claims that those serving in Somalia lost their guns to ENDF command and that they may have been relieved from AMISOM as the crisis back home continues to deteriorate. The AMISOM, which is set to leave Somalia in 2021, has not publicly commented on the latest development, which showcases fragility in Ethiopian forces.

The Ethiopian government has gone offensive against TPLF, which it accuses of internal sabotage. Thousands of people from Tigray have reported closed over to Sudan as 20,000 soldiers in TPLF engage ENDF in key towns, with the international community calling for a ceasefire from both parties.

Since last week, the TPLF has taken control of half the soldiers from the five divisions of the Ethiopian National Defense Forces [ENDF] Northern Command that remain in Tigray—meaning it has gained 15,000 soldiers, according to three sources: a senior Ethiopian diplomat briefed on the latest developments, a senior retired intelligence officer in Tigray who continues to work for the TPLF, and a source in Tigray monitoring the situation. But the seizure of Ethiopian military hardware and equipment has heightened the importance of logistical supplies for the TPLF, which will inevitably depend on Sudan’s stance, the Foreign Policy said.

On Saturday, the TPLF which has been launching missiles in Amhara cities went overboard and fired at Eritrea, with sources confirming that Asmara, Eritrea's capital, becomes the latest casualty in the Tigray war. It's not clear if the attack could spoil the booming relationship between Addis Ababa and Asmara.

From early November, sources said that there have been no Ethiopian troops movement in Gedo, Bay, and Bakool regions within Somalia in recent weeks with reports indicating that the non-Amisom contingent that had been serving in the region was withdrawn and taken back home in preparation for Tigray offensive my

The only troop redeployment so far took place in early November in the Doolow town area according to multiple sources. What residents saw is increased deployment of Liyuu Police on the Ethiopia side of the border. The troops joined up with their brigade in Dollo Ado, Ethiopia, and were since redeployed in other parts of Ethiopia; Liyu Police replacements seen in Dollo Ado.

Ethiopian PM Abiy Ahmed accuses the Tigray region of sabotaging his agenda, arguing that nothing will stop his military operations in the region. The confiscation of Tigray officers arms within AMISOM could probably lead to the direct intervention of AU in the ongoing Tigray crisis according to analysts.