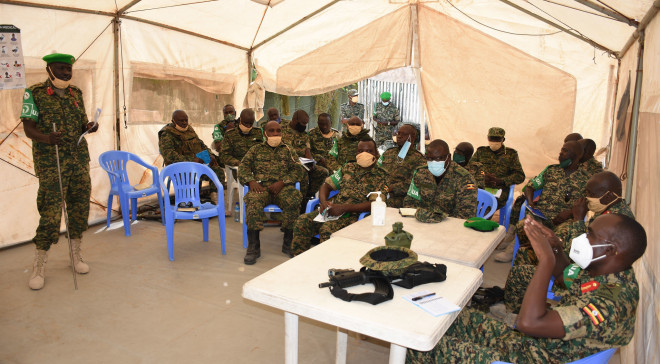 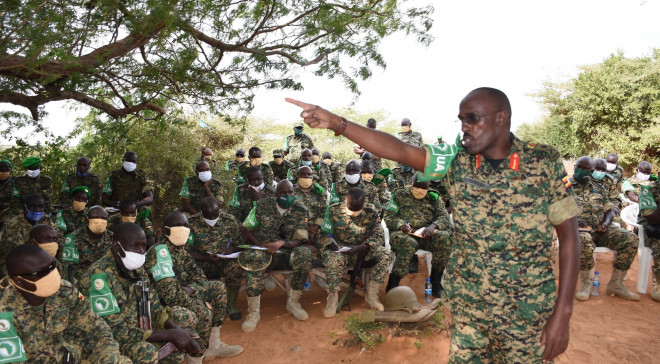 Brig. General Don Nabasa said the trip was to allow him to familiarize himself with his Area of Responsibility [AoR] and to assess their welfare and operational readiness. He visited a total of 12 Forward Operating Bases in Somalia, which are manned by Ugandan troops.

At the various FOBs, Brig. Gen. Nabasa, who assumed office recently, was received by the military leadership who briefed him on the prevailing security situation in their respective areas and later addressed the troops.

Brig. Gen. Nabasa, who is also the AMISOM Sector 1 commander, urged the soldiers to maintain the operational readiness of the “highest order” and to remain vigilant in the implementation of the mission’s mandate, particularly in conducting operations to degrade the Al-Shabaab so as to ensure peace and stability returns to Somalia. He urged the soldiers to maintain the discipline, values, and ethos of the mission.

“Discipline is very important,” he said, adding “As Ugandan soldiers serving under AMISOM, you must maintain the institutional discipline of the Uganda Peoples Defence Forces and ultimately, that of the mission, to ensure that the mission achieves its mandate of restoring peace and stability in Somalia.”

“It’s through the Pan-African spirit that we are advancing AMISOM’s mandate to support Somali Security Forces to create an enabling environment for peace and stability,” he said.

Brig. Gen. Nabasa reminded the soldiers of the critical need to secure the upcoming elections, noting that Somalia will soon hold both parliamentary and presidential elections.

His field visit comes at a time when Somalia is preparing to hold national elections in which AMISOM will support the Somali National Security Forces (SNSF) in securing the electoral process. Uganda is a major stakeholder in the peacekeeping mission in Somalia.