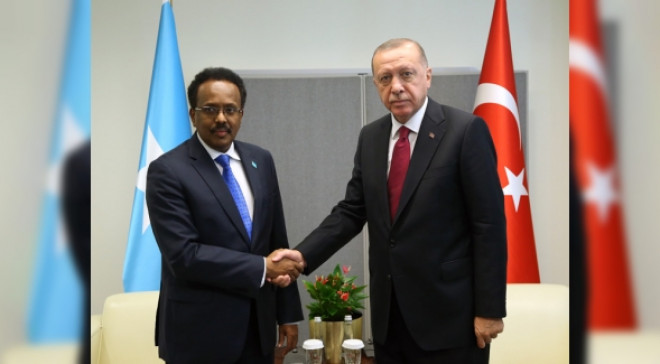 MOGADISHU, Somalia - The union of presidential candidates in Somalia has asked Turkey to be cautious with the country's electoral politics, arguing that Ankara should try to be "neutral" as a friend to the country and leave politicians to "square" it out when the time comes for elections.

In a tough-worded letter, the union under the leadership of former Presidents Sharif Sheikh Ahmed and Hassan Sheikh Mohamud expressed disappointment in Ankara following the recent move of endorsing the disputed electoral committee which the opposition wants to be disbanded.

The opposition accuses President Mohamed Abdullahi Farmajo of installing NISA agents, civil servants, and loyalists in the commission with a plan to "rig elections". Villa Somalia has repeatedly denied the claims, adding that the country is ready for the elections.

And now, the team has urged Turkey to consider staying neutral in the crisis, adding that the FGS must be held accountable. Turkey is a major development partner of Somalia and has a huge presence in the military and construction industry within the Horn of Africa nation.

“The Council of Presidential Candidates is disappointed with the brotherly government of Turkey’s expression of support and praise for the unconstitutional electoral committee established by the federal government,” read the statement.

“The expression of support for the committee is contrary to the joint statement by Somalia’s international partners, of which Turkey was a signatory and which was issued on 16/12/20, that recognized the committee as partisan and therefore lacking legitimacy,” they noted.

The letter was copied to Turkey embassy in Mogadishu but Ankara is yet to respond. The Turkish government trains the Somali military and the police besides massively investing in education and health within Somalia, besides calling shots in the country's national administration.

“The Council, therefore, calls on our brother government of Turkey’s ambassador in Somalia to take a neutral stance on the issue of elections in Somalia and treat Candidate Mohamed Abdullahi Farmajo and other candidates the same,” the candidates said.

The opposition presidential candidates also asked Turkey to delay a reported plan to deliver weapons and ammo to the Harma’ad unit of the Somali police. In a letter dated 12 December and sent to the Turkish ambassador in Somalia, the opposition candidates said they had learned Turkey was planning to deliver 1,000 G3 machine guns and a large number of bullets.

They noted that the federal government has been using the Harma’ad forces to suppress its opponents in regional elections and expressed worry that the weapons and ammunition will be used to “hijack” the 2020/21 elections. The letter asked Turkey today deliver the weapons until after the conclusion of the elections.

On Thursday, a heavy presence of the police was also noted in the country's capital Mogadishu with a reported plan by opposition supporters to occupy the streets. Somalia was set to hold elections starting this month but the process has been delayed due to disputes over the composition of the electoral committee.

Read the statement below: 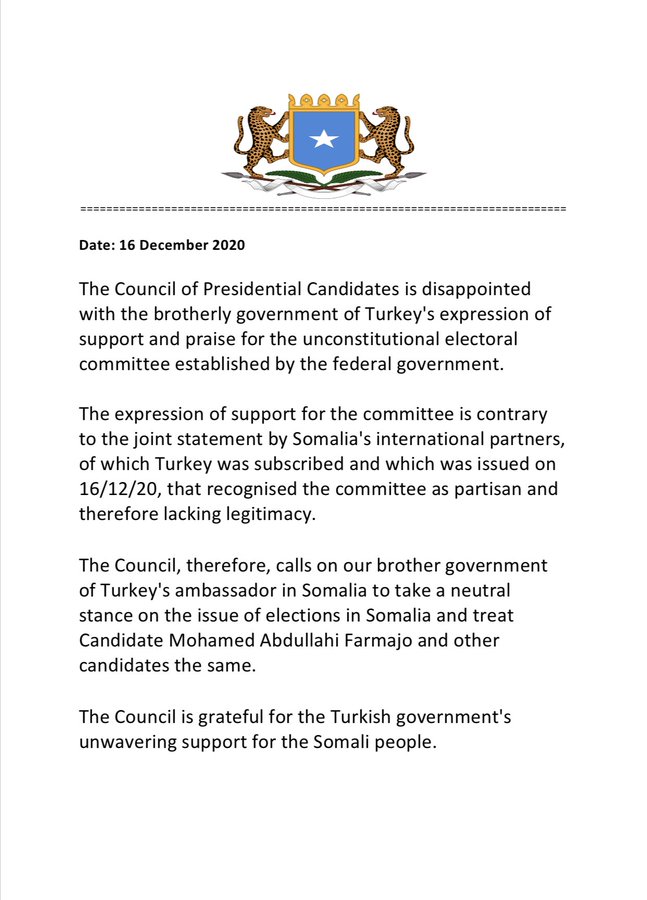