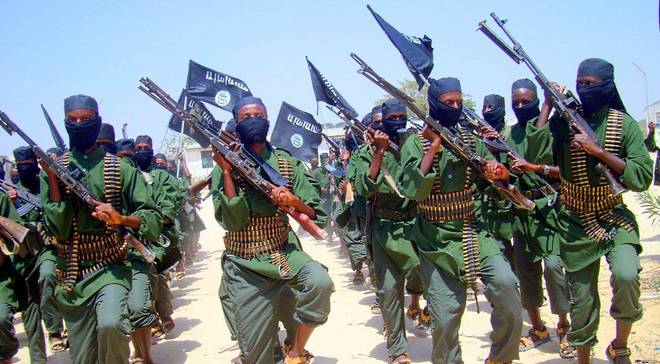 MOGADISHU, Somalia - Two Al-Shabaab militants were on Saturday killed and another was wounded in a fresh airstrike carried out in middle Juba, US military confirmed, in the latest onslaught against the insurgents.

In recent times, such airstrikes have targeted Al-Shabaab controlled villages, as part of neutralizing the insurgents by destroying their training and recruitment bases.

“Al-Shabaab kills regularly and indiscriminately,” said Castellanos, who has been supervising the airstrikes against the militants.

Such airstrikes, he added, will protect civilians from exploiting Somalis through illegal taxation, which they use to finance their criminal activities in the country.

“This al-Qaida affiliate exploits innocent Somalis, displaces families, and imposes illegal taxes through force and violence," he said in a statement.

"They want to export their vision of destruction more widely. It is our collective international efforts and persistent pressure that prevents this from occurring.”

Al-Shabaab has intensified attacks against civilians and security forces, killing at least 25 soldiers at El-Salini military base last week in Somalia, police said.

During Saturday's raid against the militants, one more terrorist was injured and an Al-Shabaab compound was dismembered, AFRICOM said.

Although such airstrikes have left a number of civilians dead in the past, AFRICOM said: "We currently assess no civilians were injured or killed as a result of this airstrike".

For instance, the president kicked out Deputy Army Commander Brigadier General Mohamed Barise last week, over the El-Salini military base raid by Al-Shabaab.

The attack by US military comes amid reports that Al-Shabaab militants are moving from villages to take refuge in urban centers due to frequent airstrikes, UN report noted.

After losing grip at the capital, Mogadishu in 2011, the Al-Shabaab militants had shifted base to remote villages, especially within central and southern Somalia.

Somalia remains key to the security environment of East Africa, and its long-term stability is important to advancing U.S. interests in the region, AFRICOM said.

"We will continue to work together on our support of the Federal Government of Somalia in its effort to bring improved governance," read the statement.

Last year, the US conducted a record 63 airstrikes against Al-Shabaab militants leaving dozens of militants dead, and the number could surge this year due to frequent raids against the militants.