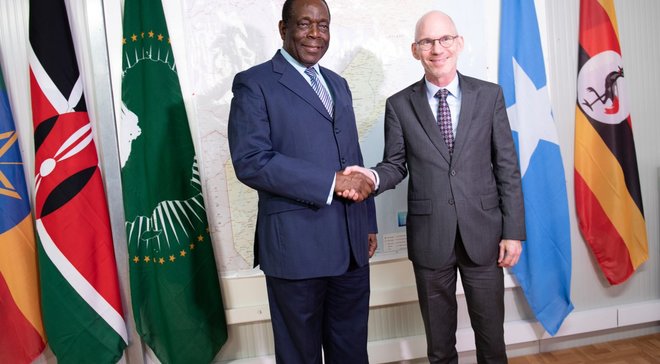 James Swan, the special representative of the UN Secretary-General for Somalia who arrived in Mogadishu on Tuesday, pledged to collaborate with the African Union Mission in Somalia (AMISOM) to help support peace efforts in the Horn of Africa nation.

"We have no more important non-Somali partner than the African Union. This relationship is critical to our collective regional and international efforts to support Somalia and the Somali people," Swan said in a statement issued by the AU mission.

The U.S. national who was appointed to the position by UN chief Antonio Guterres in May met with senior AMISOM officials led by Francisco Madeira, special representative of the Chairperson of the African Union Commission for Somalia in his first engagement in Mogadishu.

In his remarks, Madeira said AMISOM would benefit from Swan's vast knowledge of Somalia, having served as a political officer in the Office of the U.S. special envoy for Somalia from 1994 to 1996.

"We will seek coordination, collaboration, and harmonization of positions to ensure that aspects of inclusive politics are enhanced in order to yield results," Madeira said.