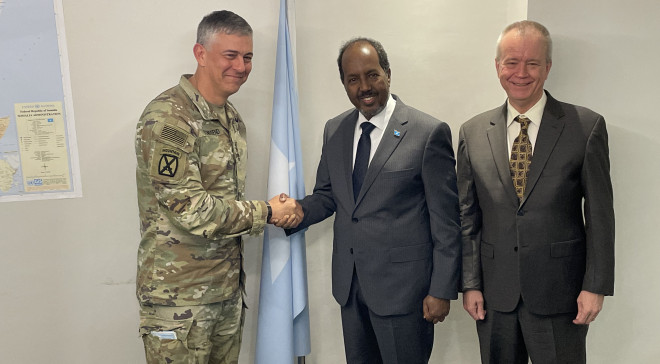 MOGADISHU, Somalia - The US Africa Command has pledged to work closely with the incoming Somalia administration under the stewardship of Hassan Sheikh Mohamud, who defeated President Mohamed Abdullahi Farmajo in last week's presidential poll, which had been delayed for months.

The United States has been a key security and development partner of the Horn of Africa nation, which has struggled with insecurity for the last three decades, following the collapse of the military regime of Siad Barre in 1991.

On Saturday, US Africa Command boss General Stephen Townsend held talks with Hassan Sheikh Mohamud, whose victory has seemingly gotten support from most Somalis, particularly the team which has been working hard to topple Farmajo.

The discussion centered around strengthening the Somali National Army [SNA] which is still undergoing rebuilding after decades of struggle. The top army boss also hailed the country for steering a successful election, despite numerous challenges.

"On May 21 General Stephen Townsend congratulated Hassan Sheikh Mohamud and the people of Somalia on the successful completion of Somalia's elections," the command noted. "The two discussed how AFRICOM can work with SNA Force to achieve a more peaceful and secure future that Somalia's citizens deserve."

For the last year, most of the US Africa Command troops have been commuting to Somalia from the neighboring Djibouti and Kenya after they were repositioned following an executive order by former President Donald Trump.