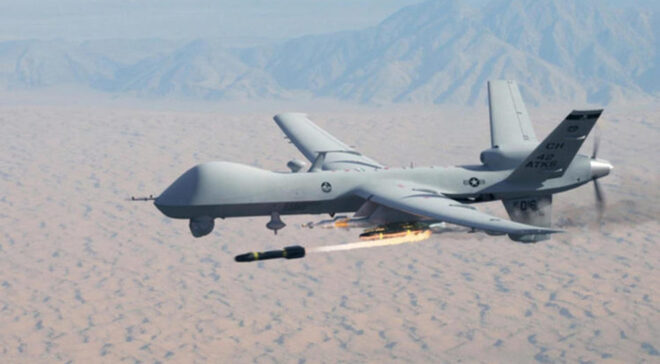 MOGADISHU, Somalia - An airstrike conducted by the US Army destroyed an Al-Shabaab compound in the vicinity of Jilib town, which is considered as the militants' headquarters, the US Africa Command said in a statement, further promising to help Somalia "effectively" fight the extremists.

The airstrike, which was the 43rd this year, comes barely a day after the US Africa Command launched the second quarterly report on the assessment of civilian casualties, where it confirmed the third civilian death this year, taking the total to only five confirmed cases of such nature.

In a statement, the US military said that at least one Al-Shabaab terrorist was killed during the encounter, with another one badly wounded. Another Al-Shabaab compound was badly destroyed by the drone strike, AFRICOM added, without disclosing further details about the operation.

"The command's initial assessment concluded this airstrike killed one terrorist and wounded one terrorist. An al-Shabaab compound was destroyed in the airstrike," read the statement. This was the second airstrike against Al-Shabaab this month in the war-torn nation.

Despite claiming that the victim was an Al-Shabaab member, the Somalia-based militants released a counter statement arguing that the airstrike left three children dead in Jilib town. The militants accused the US army of launching "cowardly" attacks against innocent civilians.

The US Africa Command had launched the civilian casualties assessment inquiries following rising claims of civilian deaths. And in regard to the latest complaints, AFRICOM said the matter is still under investigation and a report would be tabled in due course to ascertain the alleged civilian deaths.

For years, Al-Shabaab militants have used Jilib town as main recruitment and training base for new entrants and joint operations by the AFRICOM, AMISOM and the Somali National Army [SNA] are yet to yield meaningful results. The region is located in Middle Juba, one of the designated terror hotspots.

The US army insisted that it will continue to assist the federal government of Somalia to eliminate the terrorists who have been wreaking havoc across the country. The operations, they said, will target hotspots after due diligence and surveillance by technical teams.

As with any allegation of civilian casualties we receive, U.S. Africa Command said, it reviews reasonably available information it has about the incident. U.S. Africa Command complies with the law of armed conflict and takes all feasible precautions to minimize risk to civilians, it added.

The 43 airstrikes this year have left close to 60 militants dead. This number excludes serious gains made by the ground troops who have managed to secure many strategic towns in Somalia within the same period, with over 200 militants said to have died this year alone.

"In support of the Federal Government of Somalia, U.S. forces will use a range of effective and appropriate methods to assist in the protection of the Somali people," AFRICOM said, emphasizing the need to push for the economic stability of the country.

"Together with partner and allied forces, U.S. Africa Command works on a daily basis to improve security conditions to enhance governance and economic development while preventing al-Shabaab's desire to expand their reach and further export violence."

U.S. Africa Command, AFRICOM added in the statement, continues to work with its Somali partners to transfer the responsibility for long-term security in Somalia to the Federal Government of Somalia and its Member States, who have been at loggerheads in the recent months.