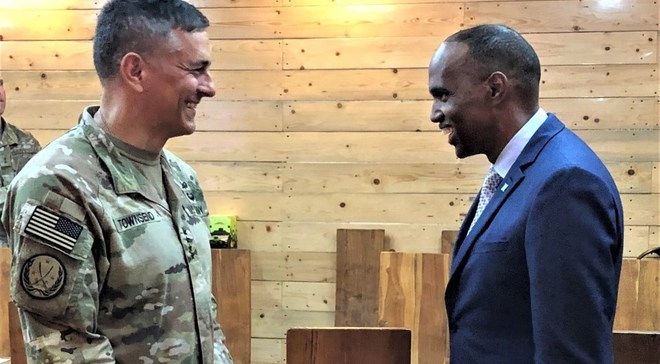 MOGADISHU, Somalia - Gen. Stephen Townsend, the US Africa commander, concluded his two-day visit to Kenya and Somalia, over a month after Al-Shabaab raid in Manda Airfield.

At Manda Bay, Townsend assessed the security situation in the KDF installation, which was raided by the Al-Shabaab militants on Jan 5th, leaving three people dead, AFRICOM said.

Townsend, AFRICOM added, met US servicemen at Manda Airfield, to gain a first-hand account of what transpired during the deadly attack.

While submitting to US Senate Armed Forces Committee, Townsend said: "We were not prepared for the attack, we shall seal loopholes to avert future raids."

"Kenya’s security contributions help contain the spread of al-Shabaab," said Townsend, the top most American general in Africa. "We truly understand the danger al-Shabaab poses and why it is important to pursue them."

Gen. Townsend also hailed Kenya's contributions towards fostering peace and stability in Somalia, a country that has fought inter-clan conflict and Al-Shabaab menace for decades.

There are roughly 3,000 Kenyan troops in Somalia under AU Mission in Somalia, although the number could be significantly reduced to scale down operation costs, AU said.

“Kenya’s extended contributions and commitment to AMISOM not only reflect their dedication to their own defense but to the collective defense of their neighbors as well," added Townsend.

In the company of ambassador Donald Yamamoto, Townsend also made a couple of trips in Somalia, visiting some of the most affected areas in the Al-Shabaab war.

On Thursday, Townsend held closed-door discussions with Jubaland President Ahmed Madobe and his Puntland counterpart Said Deni, which was anchored in the fight against Al-Shabaab, AFRICOM said.

Both Deni and Madobe have been instrumental in the fight against Al-Shabaab, although their relationship with FGS has been fragile lately, further worrying American authorities.

“I commended Madobe for coordinated operations by the Jubaland Security Force, Danab, and SNA that have struck at al-Shabaab in the Juba River Valley,” Yamamoto said, recognizing Madobe as president for the first time.

He added: “We call on the Federal Government and all Member States to work constructively together to fight our common enemy al-Shabaab."

The trip comes at the time Jubaland forces are at loggerheads with SNA troops in Gedo region, a move that has build tension within the area in the last two weeks.

Already, FGS has ferried dozens of Turkish-trained SNA contingent to Gedo, causing an outcry from Jubaland administration which has accused Mogadishu of "forceful occupation".

Townsend's visit highlights mutual cooperation between the US military and its East Africa partners in crushing extremism elements in the region, AFRICOM said.

America is also plotting to upsurge China and Russia from the region, which has since shifted focus to military power in the Horn of Africa.

Russia is contemplating setting a military base in Somaliland, the first-ever in the region, which has frequently struggled with armed conflict.

Al-Shabaab militants have caused havoc in East Africa for the last decade, although the group has been extremely degraded by security forces.