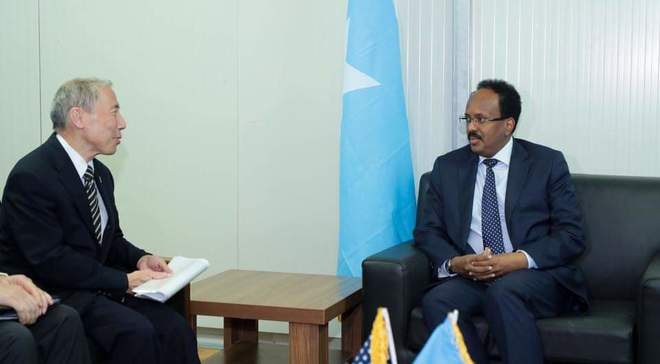 MOGADISHU, Somalia - The Federal Government and regional states leadership in Somalia should urgently embrace dialogue, the US has urged, days after Galmadug polls dispute.

The United States has been calling shots in Somalia, often making decisions in favor of federal government, resulting in unending criticism from the opposition.

For instance, Donald Yamamoto, the US ambassador to Somalia, was quick to endorse Galmadug presidential polls, which saw Ahmed Abdi declared the winner on Sunday.

Top candidates had boycotted the polls citing "interference" from Villa Somalia, which has since acknowledged the outcome.

The US badly exposed in Galmadug dispute

And the dispute has badly exposed Washington, with stakeholders accusing Yamamoto of going against US foreign policy.

In a statement, Forum for National Parties [FNP], an opposition outfit, accused Yamamoto of "endorsing fraud" in Somalia following the polls.

FNP comprises of six political parties under former Presidents Sharif Sheikh Ahmed and Hassan Sheikh Mohamud, who have been critical of Farmajo's administration.

By doing so, FNP added, "he surrendered his privilege as an honest and impartial diplomat, who is pushing for dialogue in Somalia"

Prior to the polls, FNP had called for dialogue following suspicions among top players, including within the elections board.

"Yamamoto's position contradicts the core principles of good governance and promotion of democracy that are key pillars of US foreign policy," the statement read in part.

With the crisis threatening Somalia's December polls, the US has since adopted a reconciliatory approach, calling for a truce between FGS and federal states.

In a statement, the US urged the two parties "to renew their mutual commitment and coordination, in cooperation with regional and international partners, to defeat al-Shabaab".

Surprisingly, the US seemed to recognize Jubaland state, years after openly sidelining the region due to her leader, Ahmed Farmajo.

A reenergized process of dialogue and compromise, Washington added, "will be necessary on all sides to address security challenges for the good of Somalia."

The US concedes mistakes in Galmadug

The US acknowledged the "difficult" process of rebuilding Somalia, which has struggled to since 1991, following the ouster of Siad Barre.

In the statement, the US concedes that Galmadug's polls were "imperfect" contrary to Ambassador Yamamoto's initial remarks.

"While recent electoral processes were imperfect, we call on all Somalis to focus on reconciliation," the statement read in part.

By reaffirming reconciliation between FGS and regional states, Somalia’s leaders will uphold their own commitments to increase political inclusion, US added.

Besides Galmadug, Southwest and Hirshebelle are some of the states that the FGS has been accused of "interfering" with their internal affairs.

Jubaland under Sheikh Madobe and Puntland which is under Said Deni, have fairly resisted FGS interference leading to the current impasse.

US' long-term strategy for Somalia

The reconciliation push by the US is, however, is informed by the impending polls in Somalia, scheduled for December this year.

US address: "We all relevant stakeholders to work together to establish security and to ensure credible elections this year."

All parties, the US said, should negotiate in good faith, resist the temptation to act as spoilers, and avoid destabilizing the political process in any way.

"The people of Somalia demand it, future generations expect it, and Somalia’s leaders must enact it," added the statement.

President Mohamed Farmajo, who has been at the helm since 2017, is struggling to stamp his authority, ahead of a re-election bid.

Throughout his administration, Farmajo has been tussling with federal states' leadership, in a bid to take total control.

For instance, he has been linked to Galmadug and Southwest presidential polls, with the opposition accusing him of "imposing" his allies.

But his crisis with Jubaland authorities has stood out among many, where the FGS is accused of trying to take over the Gedo region with the help of Ethiopia.

When he visited Nairobi last week, Farmajo said: "some regional states are working with foreign powers to overthrow me".

So tragic has been the fallout, that even the opposition groups have persistently called for a truce, blaming the Somalia leader in the process.

Farmajo, FNP said, "is keen to take over member states for the sole purpose of predetermining the outcome of next elections in December."

Spy agency boss Fahad Yasin has often been also linked to "secret plot" to take over federal states through the election of friendly candidates.