US drone base in Somalia attacked by Al-Qaeda-linked extremists 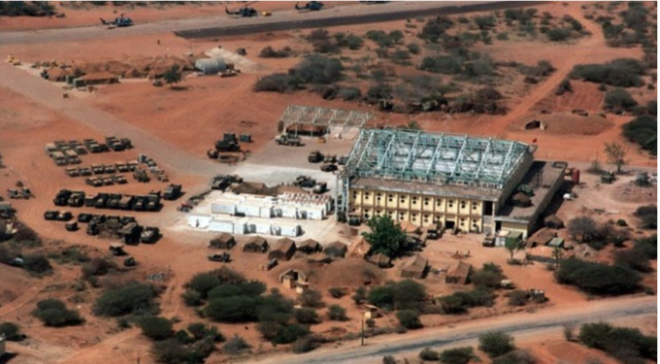 BALEDDOGLE, Somalia – The Al-Qaeda’s most powerful allay in East Africa, Al-Shabab group claims responsibility for a massive attack on US military base in southern Somalia on Monday, September 30, 2019, Garowe Online reports.

In an English-written statement, Al-Shabab said after breaching the perimeters of the heavily fortified base with car bombs, armed militants on foot stormed the military complex, engaging the American troops in an intense firefight.

The base located about 100 kilometers [62 miles] northwest of Mogadishu is used to launch drone strikes against jihadi targets, and also serves as a training base for Somalia's special forces.

Radio Andalus, widely known as Al-Shabab's official mouthpiece channel, citing unnamed commander reported the attack led to deaths of more than 100 soldiers while 5 Drones and Helicopters in the camp were utterly destroyed.

Somali military rejected Al-Shabab claim on the death toll, says the country’s forces and their US partners repulsed the daring attack after foiling the car bombings outside the army outpost.

The US embassy in Mogadishu released a statement confirming that the troops suffered no casualties following an al-Shabab attack against the American Special Forces’ base in Baledogle base on the outskirts of Mogadishu.

“The forces stopped this ultimately failed attack due to their alertness and swift response,” said the U.S. Ambassador Donald Yamamoto in a statement sent to the newsrooms.

In response to the attack and in self-defense, US Africa Command conducted two airstrikes targeting Al-Shabab, killing “ten terrorists” and destroyed one vehicle involved in the raid.