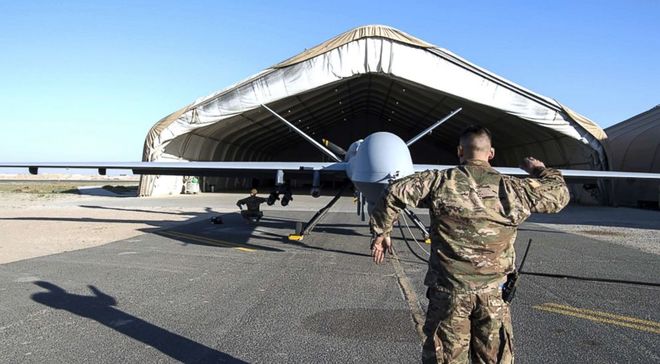 MOGADISHU, Somalia - The US army launched another two drone strikes in the vicinity of Bush Madina, AFRICOM said, leaving 8 Al-Shabaab militants dead in the latest raid against the Al-Qaeda linked group.

US Africa Command said the drone strikes, apparently, the 34th since the beginning of the year was waged with the help of Somalia National Army [SNA] at the Al-Shabaab stronghold.

The two raids were carried out on April 2-3.

In a statement, AFRICOM said that three terrorists were killed, although their identity was not immediately established. The deaths take the death toll in the last three months to 32, excluding those occasioned by ground combats.

Just like previous outings, the Command insisted that "We currently assess no civilians were injured or killed as a result of the airstrikes."

Amnesty International had earlier this week accused the US military of failing to account for various civilian casualties from such airstrikes. To date, it said, over 21 civilians have been killed.

But Gen. Stephen Townsend, the commander AFRICOM, defended his team, also pledging to unveil a quarterly report on civilian casualties this month. The FGS had also backed US airstrikes.

“We’re enabling progress and creating opportunities for our partners to capitalize on. We’re seeing them do just that on the ground.”

Al-Shabaab militants occupy large swathes of rural central and southern Somalia, where they have traditionally used for recruitment and training of young people, officials said.

But the frequent airstrikes and persistent ground combats by SNA and AMISOM have forced some of them to take refuge in urban centers. Some are said to be moving back to the capital Mogadishu, where their lost grip in 2011.

The allied forces have also made significant gains in toppling the militants, particularly in the recent liberation of Janaale in Lower Shebelle. Top militants were captured during the raid, police said.

While the use of military force against Al-Shabaab is necessary, the approach cannot singlehandedly change fortunes in Somalia, thus the economic support given by international partners, the US military said.

In support of the Federal Government of Somalia, U.S. forces will use all effective and appropriate methods to assist in the protection of the Somali people, including partnered military counterterrorism operations, AFRICOM added.

Together with the partner and allied forces, U.S. Africa Command works on a daily basis to improve security conditions to enhance governance and economic development, it further said.

Al-Shabaab has killed a total of over 4,000 civilians besides butchering security forces both in Somalia and Kenya. However, the group cannot wage organized ground combat due to its inefficiencies.