US military on spot over civilian deaths in Somalia 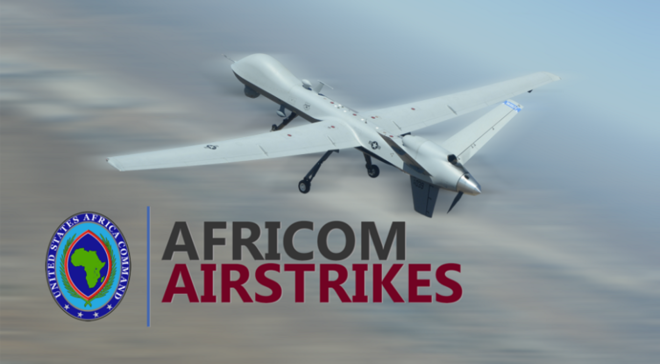 MOGADISHU, Somalia - The US African Command has yet again come under scathing attack from a rights group, following investigations into the ongoing airstrikes in Somalia, a country which has not been with a functional government for over three decades.

In a report published on Tuesday, Human Rights Watch blamed the US military for releasing "inaccurate report" about civilian casualties in Somalia, adding that Washington has also failed to cushion victims of the drone strikes contrary to international laws of war.

According to the report, at least seven civilians have died this year in Somalia, with three others left with "life-threatening injuries. Two or the airstrikes were conducted in Middle Juba, one of the known Al-Shabaab strongholds.

“The US military has not seriously investigated two recent airstrikes in Somalia in which civilians were killed and wounded in apparent violation of the laws of war,” said Laetitia Bader, Horn of Africa director at Human Rights Watch. “Reaching out to civilians seeking redress is not only the right thing to do, but it will also help make its civilian casualty assessments more accurate.”

Since January, the US military has carried almost 40 airstrikes mainly in Middle Juba and Lower Shebelle regions according to details taken from updates usually posited on AFRICOM official Twitter account. Within the same period, at least 60 suspected Al-Shabaab militants have been killed.

The airstrikes have also left some of the most sought terrorists dead. Bashir Qorgab, the man linked to Al-Shabaab raid at Manda Airfield in Kenya on Jan. 5 was killed in Saakow town in February. Also killed a month later was Yusuf Jiis, another Amniyat commander in Somalia, AFRICOM had reported.

But between February and May, Human Rights Watch said, it interviewed 14 people by phone, including relatives of those killed in the February and March strikes – four of whom visited the scene in its immediate aftermath – and assessed publicly available information about the airstrikes.

During the inquiry, the group established that seven civilians including a businessman linked to Somalia's telecommunication giant Hormuud Telecom were killed despite not having any tangible links to the Al-Shabaab, the terror group which has caused anguish in East Africa since 2008.

However, in a quarterly report released in April, AMISOM, through its commander Gen. Stephen Townsend, admitted causing only two civilian casualties, also insisting that all the drone strikes are launched after keen investigations and surveillance.

The general, who recently defended the presence of close to 7,000 US troops in Africa at the US Senate Defense committee, added that such operations had significantly degraded extremist groups across the continent in line with AFRICOM vision.

“The growing threat in Africa from terrorist networks is significant and impacts not only Africans but also the U.S. and our international allies,” said Townsend, who took over the command in 2018.

“Our kinetic operations in Africa follow a strict, disciplined, and precise process. Nobody is more devoted to the preservation of innocent lives than the U.S. military, and our actions and processes reflect that fact.”

The US government authorizes commanders to provide ex gratia or “condolence” payments to families harmed by US military action. These payments are voluntary and are not an admission of fault or responsibility.

On June 1, Human Rights Watch added, AFRICOM stated in a letter that no payments have been made in either of the two incidents of civilian casualties it has acknowledged in Somalia since 2017. It said it was continuing to work with the Somali government and the US State Department “on appropriate measures to address unfortunate instances of civilian casualties.”

“AFRICOM seems determined not to uncover whether its airstrikes killed civilians or violated the laws of war,” Bader added. “The military chain of command should recognize that not only does it have a legal obligation to investigate, but that basic decency toward the families of those harmed means providing financial assistance and an apology, not silence.”

The report complements that of Amnesty International, which in March linked the US to "misconduct" in relation to airstrikes in Somalia. The group maintained that since 2017, over 21 civilians had been killed in the airstrikes, adding that seven of the victims died in 2020.

Seif Magango, Amnesty International’s Deputy Regional Director for Eastern Africa, hailed the US team for acknowledging collateral damage in the operations but asked it to "reassess and take other blames".

Further, he added, the US should consider contacting the affected families and offer much-needed repatriation for the families to carry on with their lives. No help has been given so far.

“This first regular public report acknowledging AFRICOM’s role in civilian casualties is a welcome glimmer of transparency in more than a decade of deadly military operations that until now have been shrouded in secrecy," he said.

"Now there must be accountability and reparation for the victims and their families – the US military has still neither contacted nor offered reparation to the families of any of the civilians it has admitted to the killing."

Besides helping the Somali National Army and allied forces by providing aerial surveillance, the US military is also responsible for the training of the Somali army. To date, they have trained over 1,200 Danab special forces according to data released by the UN Mission in Somalia [UNSOM].

There are close to 500 US servicemen in Somalia and Pentagon recently said that they may leave by 2027. Fundamentally, their presence has helped to degrade Al-Shabaab militants, who are said to be moving from remote villages en mass to urban centers due to increased airstrikes.