US pledges support to Somalia in fight against Al-Shabaab militants 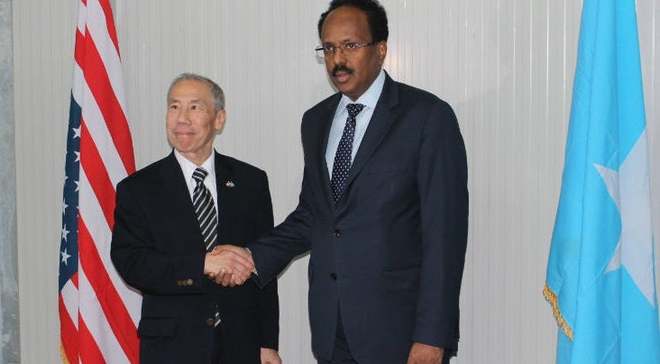 MOGADISHU, Somalia - The Federal Government of Somalia will not be abandoned in the ongoing fight against Al-Shabaab, the US has said, adding that "we will continue to stand by you".

For the last decade, Somalia has struggled to assert it's authority due to frequent Al-Shabaab attacks targeting both civilians and security forces.

On Saturday, the country suffered the worst attack in two years, leaving at least 90 people dead and hundreds badly injured.

The US to continue standing with Somalia

Donald Yamamoto, the US envoy to Somalia said the attack was a "reminder of who the enemies of Somalia are".

Ambassador Yamamoto added: "We continue to stand by you, the Somali people, as you honor the lost and fight against the evils of terrorism.”

The international community has continued to stand with Somalia following Saturday's attack, which also destroyed many businesses.

Qatar and Turkey are among the countries that have given direct help through airlifting the injured people for advanced treatment abroad, the Somali government said.

According to Yamamoto “each life is precious and valuable. Each person can help create a more secure, prosperous, and vibrant future for Somalia".

The US is one of the major partners in Somalia's quest to restore stability and reconciliation. Washington has deployed over 500 elite forces in Mogadishu.

"We are and will remain committed to working towards that goal alongside Somalia’s people, its leaders, and all future generations," he added in a tweet.

For equipping and training of Somali National Army (SNA), the US has established an army base at Ballidogle where elite Danaab troops are trained.

Although Somalia's spy agency NISA had claimed the attack was instigated by a foreign country, Al-Shabaab militants have claimed responsibility.

In a statement on Monday, the terror group apologized to the civilians who died and those wounded in the deadly attack.

"We are very sorry about the casualty that was inflicted on our Somali Muslim society, and we are extending our condolences to the Muslims who have lost their lives and or (were) wounded and or had their property destroyed."

Noting that the attack did not realize the intended purpose, Al-Shabaab said their target was a convoy of Turkey nationals. Turkey supports FGS.

Al-Shabaab said, "The Turks are our enemies and as we have said before, we will not stop fighting until they withdraw from our lands."

The US airstrikes targeting Al-Shabaab

Barely 24 hours after the attack, the US with the assistance of SNA forces launched three airstrikes southern part of the country as part of the revenge mission.

The US regularly carries out airstrikes in Somalia, though the frequency of such operations has risen sharply this year.

In an April statement, AFRICOM said it had killed more than 800 people in 110 strikes in Somalia since April 2017.

Despite years of costly efforts to combat the group, al-Shabab managed once again to detonate a vehicle packed with explosives in Mogadishu, slaughtering 81 people on Saturday in one of the deadliest attacks of the decade.

"The real hallmark of al-Shabab is its resilience," said Matt Bryden, director of Nairobi-based think tank Sahan, as quoted by AFP.

Since then they have had to abandon most of their strongholds — but they still control vast rural areas and have maintained a presence in urban centers through an extensive intelligence network.

"They win support through co-option or coercion. They have a steady supply of finances through a network of taxation and extortion," Murithi Mutiga, a Horn of Africa analyst observes.

Mutiga said one of the biggest mistakes that had been made in the fight against al-Shabab was that they were often ousted from villages without "a viable plan for what would come next."

"Al-Shabab appears to be closing the decade in as strong a position as it has been in 10 years," said Mutiga.

Despite abandoning illegal charcoal trade, Al-Shabaab militants have resorted to "mafia-style" taxation tactics to sustain her activities according to the UN Panel of Experts report.

At least 22,000 soldiers drawn from various African countries have been spearheading peacekeeping mission in Somalia under AMISOM.