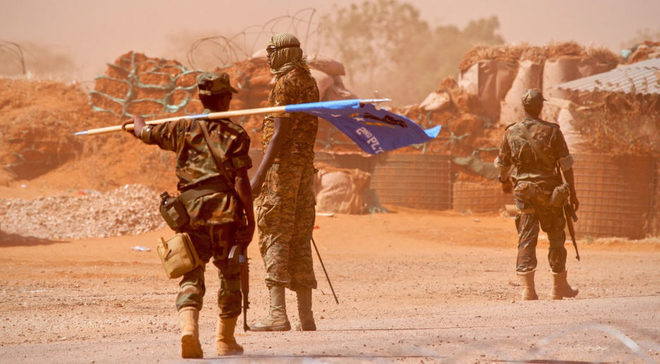 MOGADISHU, Somalia - Over 10 Al-Shabaab militants including a child soldier have surrendered in recently liberated Janaale town, a top official said, as FGS renews efforts to restore civilian rule in the agricultural-rich region.

After almost a decade of oppressive rule, coupled with endless executions, Al-Shabaab ceded the town in March after a fierce gunfight with Somali National Army [SNA] and AU forces, who were buoyed by US military, police had said.

The town was a major income generation center, which supported dozens of militants' violent operations across East Africa. During the capture, over 140 militants were killed, 28 wounded and 18 nabbed, a top official had said.

And on Sunday, Gen. Abdihamid Dirir, the commanding officer in Lower Shebelle, said the over 10 militants surrendered due to unending operations by elite troops from Danab and Gorgor, who are still manning the town.

He said: "We are receiving defectors. Almost 10 of them including a child soldier have surrendered. We are holding them for interrogations before we repatriate them to the society of normal life."

One of those who surrendered, Dirir added, is the head of Zakawat, the Al-Shabaab wing in charge of tax returns, who was heading the Lower Shebelle region. However, the SNA commander did not immediately reveal the identity due to security purposes.

Once fully scrutinized, the defectors will be released but would remain under surveillance from the authorities. Four other top Al-Shabaab commanders were arrested in March during the crackdown, the officer said.

Despite the liberation, the Ministry of Defense said it was investigating two rape incidents in Janaale, which allegedly involved SNA troops. The two suspects from the military are under detention, officials added.

This comes amid an ongoing crackdown against the militants in southern Somalia, with Danab forces conducting operations in Abdi Dhore and Berhani, 50 kilometers West of Kismayo over the weekend.

Danab, which is a special unit in SNA trained by the US military, targeted Al-Shabaab militants in the Lower Jubba region, which is fairly controlled by the Al-Qaida linked group, state-owned Sonna reported.

During the sophisticated operation, Danab forces "inflicted casualties on Al-Shabaab" after hours of an intensive gunfight. However, the state-owned media house did not reveal the number of deaths and injuries.

For years, West of Kismayo has been a battleground between US-backed Danab and Al-Shabaab militants. For instance, the militants killed a US soldier in 2018, which informed President Donald Trump's message of "courage" to US troops serving in Somalia.

Ordinarily, the area is under the jurisdictions of Kenya Defense Forces [KDF], which mans Sectors II and VI of AMISOM in Jubaland. Al-Shabaab controls large swathes of rural southern Somalia.

There are close to 7,000 active Al-Shabaab fighters in Somalia, although the group has been drastically degraded by allied forces. Further, a number of them have defected due to persistent US airstrikes and ground combats by SNA and AMISOM troops, weakening the group significantly.

But despite its endless misfortunes, Al-Shabaab can still wage small to large scale sporadic attacks, targeting members of security forces and civilians in Somalia. Statistics by the UN indicate that over 4,000 civilians have been killed by the group since 2008.