US urges Somali leaders to conclude Lower House elections before 2022 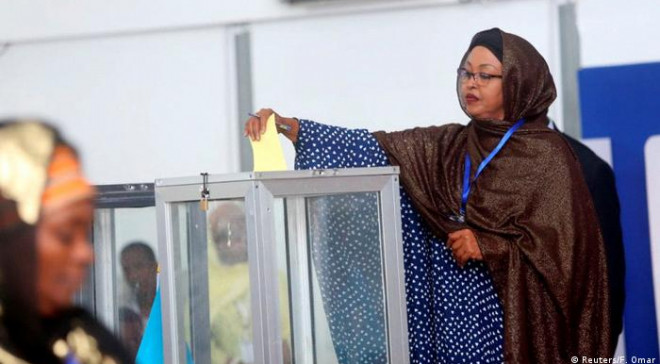 It's been 50 years since Somalia last conducted a "one-person one-vote" election [ Photo: Reuters]

MOGADISHU, Somalia - The United States has yet again asked regional leaders to expedite Lower House elections, in a bid to end an electioneering exercise that has dragged for almost a year, following several delays coupled with internal wrangles.

Based on the most recent agreement on May 27th, the elections for Lower House were to be completed in October this year but the process has dragged with various states yet to kickstart the elections in compliance with the schedule.

In a statement, the US, which appreciated the conclusion of senatorial elections, asked all regional leaders to Fastrack the exercise for the sake of stability and development within the Horn of Africa nation.

"We welcome yesterday's completion of the Upper House elections. It’s time now for Said Deni, President Madobe, Mr. Qoorqoor, Gudlawe Hussein, and Laftagareen to honor Mohamed Roble's call to conclude the House of the People elections before the end of 202," US embassy said.

"Funding is available to complete a significant portion of the House of the People elections, thanks to the candidate registration fees already collected and contributions from Somalia's partners, including the United States," it added.

Prime Minister Mohamed Hussein Roble recently said the Lower House elections should be completed by the end of this month, adding that all states should comply with the directive. Only Somaliland has started the process, electing only two of 46 MPs so far.

Each state will have 101 delegates picked by community elders electing the Lower House representatives. Once the exercise is concluded, the 275 MPs and 54 senators will elect the president of the federal republic of Somalia.

On Saturday, the three-month-long elections for the Upper House in Somalia came to an end with the election of the last two senators. Galmudug State Parliament elected Senator Abdi Awale Qaybdiid and Mahad Aden Guled bringing to a close the exercise which began on July 29.

The election of the two Senators now fills up the 54 member chamber of the Upper House. The Federal Member States however missed the 30 percent threshold for women by six percentage points. Out of the 54 seats, women occupy 13 of them translating to about 24 percent.

The exercise was marked by the mass withdrawal of candidates, especially in Puntland and Galmudug States. Allies of the FMS leaders secured elections in most FMS.

Hirshabelle however broke ranks with other FMS widening up the pool of candidates to include both opposition and pro-government candidates.
The conclusion of the Senate elections now turns the spotlight to the clans which are expected to be the remaining 273 MPs.

It's been 50 years since Somalia last conducted a "one-person-one-vote" election.