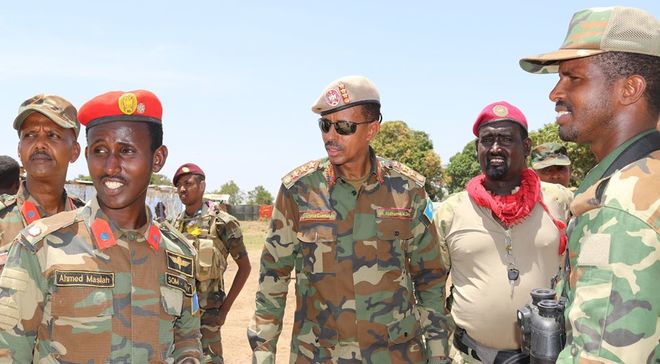 MOGADISHU, Somalia - For a decade, Somalia National Army [SNA] has been struggling with identity crisis due to numerous setbacks against Al-Shabaab militants, but not until Monday when they registered a milestone victory in the militant-held Janaale.

It just took less than 24 hours for elite troops selected from Danab and Gorgor to crush the militants in the notorious town, which has been strategic for recruitment and training of militants.

Through their SNA Radio, the army was quick to claim "victory", paying tributes to "gallant soldiers" who took part in the battlefield, several miles from Mogadishu, in the perilous Lower Shebelle region.

In fact, Ibrahim Aden Najah, the area governor, hailed the liberation as "the hallmark of all battles which has given our people a new lease of life" in his speech after the famous takeover.

While the credit will go to the infantry troops from SNA, the US military also provided logistical support, especially aerial surveillance which is critical in such delicate operations. Actually, last week, US Africa Command had killed nine terrorists in Janaale.

Hassan Ali Khaire, the Somalia PM, would not also hide his joy over the capture, saying that "our people have now begun reaping the fruits of our efforts to reform our uniformed personnel."

In a nutshell, the victory was worthwhile and could act as a morale booster to the army, which is almost being built from scratch after decades of civil war in Somalia.

'A long-term strategy for liberated regions'

But the significant victory against Al-Shabaab in Janaale could yet again test FGS preparedness in keeping at bay the militants, who have often regrouped and taken swift revenge on SNA.

Besides towns taken over by AMISOM troops, the SNA is yet to liberate and built a town from scratch, something which has derailed ongoing stabilization efforts in the country.

As such, many towns have been retaken by Al-Shabaab, which has in the past decade fought hard to topple the fragile UN-backed Somalia government. But according to Khaire, the liberation of towns boosts troops' morale.

"SNA Reform has progressively improved the capability of our forces, boosted their morale and restored the pride of our Nation," he said in a tweet.

Despite the shortcomings, Khaire however, noted that the SNA troops are actively involved in keeping law and order in the town, in compliance with international partners' effort to stabilize Somalia.

"Once an area is liberated by the SNA, SPF will gradually take over the mandate to keep law and order," added Khaire, who is jointly facing re-election dilemma with President Mohamed Abdullahi Farmajo.

"This will be followed by the establishment of local administrations and the arrival of government & international actors to partner in overall stabilization."

For the last 10 years, Africa Union Mission in Somalia [AMISOM] has been critical in maintaining peace in the country, but is set to end it's mandated by 2021 in compliance with an exit strategy.

Already, 1,000 soldiers are set to leave by the end of March this year, as the mission puts measures to ensure the tentative exit date is adhered to. There are close to 22,000 troops from East Africa countries in Somalia.

Throughout the Al-Shabaab siege in Somalia, AMISOM has played an integral role in helping the government to uphold law and order, something acknowledged by Mr. Kheire in his tweet on Monday.

He said: "Today's success would not have been possible without the ultimate sacrifices by our African brothers and sisters in AMISOM."

"On behalf of the FGS, we express our heartfelt gratitude for their continued role in bringing lasting peace and stability to Somalia."

The victory, however, reignites hope that the SNA troops are ready to take over fundamental security assignments, even long after the exit of AMISOM troops.

Already, the AMISOM has started pilot testing by handing over security responsibilities, starting with the Halane Basecamp, which plays host to the mission's troops.

"AMISOM has handed over the security responsibilities of a community near the Halane basecamp back to the Federal Govt' of Somalia," AMISOM tweeted on Tuesday, adding that "it's part of the transitional plan".

Whether the SNA is ready for the tough assignments or not, it's something that will be manifested long after AMISOM exit.

At home, the force us usually accused of political bias, which Abdirahman Abdishakur said: "We encourage them to continue on this path and stay away from politics".

Although Al-Shabaab has managed to wage significant sporadic attacks across East Africa, the group has been greatly neutralized due to a concerted effort to crush it by allied forces.

But their loss at Janaale could prove the ultimate fall, given that the town has been used as a "judicial" center for the militants. It is also an important tax collection center given its agricultural produce over the years.

Gen. Abdi Hamid, who led the incursion, observed that the defeat will give room to thousands of students to resume studies after frequent interruptions by the militants.

"Well done SNA liberate Janaale town was needed. Now kids like her will go to school and won't be terrorized by al shayadin," he said in a tweet, Monday.

Terming the take over as "biggest" victory, Dr. Hashi, popularly known as Somali Pundit, said the conquer of Janaale "opens up the supply lines between Marka and Afgooye and important trade route".

Last month, SNA troops had suffered huge casualties in Lower Shebelle, after the raid by Al-Shabaab at El-Salini military base, which left over 25 soldiers dead.

But all said than done, President Farmajo will have a task of rebuilding confidence among members of the public on the army, which has suffered a reputation for allegedly "undermining the rule of law" at the expense of protecting the government's "poor" policy on federal states.