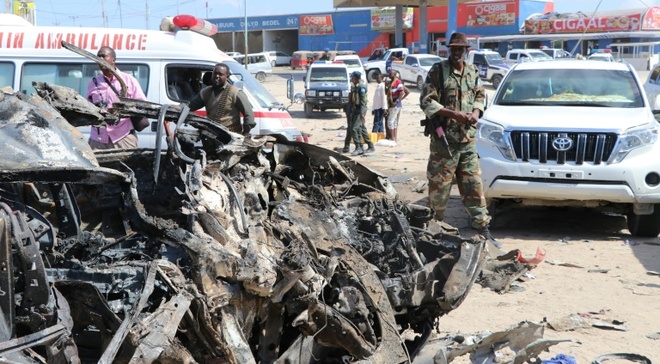 MOGADISHU, Somalia - Despite reports about their financial constraints and infighting, Al-Shabaab has managed to wage sophisticated attacks against security forces, and at times, killing innocent civilians and leaders.

Since January 2020, the Al-Qaida linked group had waged 18 successful attacks within Kenya, most of them targeting security forces and non-locals [non-Somali ethnic] mostly in northeastern and coastal regions, police said.

At least 23 people have been killed out of the attacks, including three Americans, who died during the unprecedented Manda Airfield raid on Jan. 5 this year, reports indicate.

But it's in Somalia where the group has extremely intolerable damage within the same period, excluding the deadly December attack which left 90 dead in Mogadishu. In between, there have been sporadic attacks mainly targeting Somali National Army [SNA] and AMISOM.

For instance, the group killed over 20 SNA soldiers in Lower Shebelle last month. The soldiers were part of the team which manned El-Salini military base and had just witnessed a similar attack last year.

On Sunday, Nugal Governor Abdisalam Hassan Hersi, became the latest victim of the organized terrorist group, after his death following an explosion outside a police station in Garowe, the regional administrative capital of Puntland state.

The attacks are some of the well planned and sophisticated raids against innocent civilians and security forces executed by the militants. Close to 5,000 people have died in the last decade due to the group's uncivilized raids against civilians, reports indicate.

But why can't they stop killing people?

For the last decade, the militants have intensified sporadic attacks against people in their bid to topple the fragile UN-backed Somalia government, with the ultimate aim of establishing a parallel administration within Somalia.

While the group is yet to succeed, it has, however, managed to get hold of southern and central Somalia, and even establishing temporary headquarters in Jilib, within Middle Juba, where recruitment and training are done.

To sustain the crackdown, Al-Shabaab has imposed illegal mafia-style taxation tactics, which are executed in the form of Zakat. Businesses from their territories often remit the taxes on either daily or monthly basis depending on their agreement, officials said.

While acknowledging the group as an existential threat, Rashid Abdi, a researcher in the Horn of Africa, notes that Al-Shabaab is "no longer just an insurgency" as believed by groups pushing for its elimination.

"It has progressively become mainstream. Blended well. Developed a resilient "shadow bureaucracy". Penetrated every nook and cranny of life," he notes.

This, he adds, gives the militants an open field to "sell ideologies" by countering structures set by the Federal Government of Somalia and allied partners, especially the AU Forces in Somalia [AMISOM]

And Abdiwali Sayid, another analyst, opines that the militants are "strong enough" and explores the "weaknesses of their opposite government" and partners, who are yet to fully unleash towards them.

With their purported "ability" to launch catastrophic attacks against major allies like the US, Islamic scholar Christopher Anzalone adds, the group is on the verge of a killing spree with the ultimate aim of seizing authority in Somalia.

Wrangles amongst FGS and partners

Lack of synergy among forces mandated to fight the militants is also another key motivating factor for Al-Shabaab, which has often exploited such loopholes to unleash terror on both security forces and civilians.

The FGS has particularly been on the receiving end, for allegedly driving a wage between SNA soldiers and their regional partners, along with those serving in AMISOM.

For instance, the troops were embroiled in a fierce gunfight at the Gedo region last month, leaving several people displaced and others injured within Balad-Hawo town near the Kenya-Somalia border.

So intense was the conflict that Kenya and Ethiopia forces were dragged into the quagmire, necessitating shuttle diplomacy by Nairobi to have an urgent meeting following the pressure by the US, those in the know said.

"Hard to beat such enemy when we are fighting among ourselves," adds Mr. Abdi, who has been particularly critical of the deployment of SNA at Gedo, terming it "completely out of order" in his previous criticism.

There were reports that Ethiopian non-AMISOM troops had crossed over to Somalia last week, with some sources indicating that they had set an army base within Doolow, further "provoking" Jubaland administration.

The US warned FGS against the deployment, calling it "unnecessary" during the submission at UNSC. To them, such a move "gives Al-Shabaab room for resurgence" thus threatening to erode "progressive gains we've made" in Somalia.

The route to victory against Al-Shabaab

Even though the group continues to wage small to large scale sporadic attacks within East Africa, security forces have managed to significantly reign against them, officials said.

For instance, the group lost grip of Janaale, a strategic town within Lower Shebelle a fortnight ago, following a joint operation by Somali National Army and partner forces.

During the raid, over 140 Al-Shabaab militants were killed, 29 critically wounded and 18 captured, Abdihamid Mohamed, the ground commander said in a statement.

The US has also continued with aerial bombardments within central and southern Somalia. By last week, at least 29 militants had been killed in 32 airstrikes since January, AFRICOM said in a statement.

One of the airstrikes, Gen. Stephen Townsend said, eliminated Bashir Qorgab, an Al-Shabaab operative who is linked to the Manda Airfield attack, which left one US Marine dead and two contractors.

Even though the group has been significantly degraded in the capital Mogadishu and its suburbs, the group has, however, managed to unleash mercilessly, killing many in the process, Anzalone noted.

"It continues to retain significant, deadly military capabilities as well as the ability to plan and successfully execute mass-casualty attacks in the heart of Somali cities," he points out in one of his latest publications.

While appearing before House Armed Forces Committee, Townsend conceded that Al-Shabaab remains "dangerous" within the East Africa region, adding that "this informs our routine airstrikes".

Last week, the group released details of a five-day conference which forced on "gains made" within East Africa in their quest to "protect" Jihad, a philosophy which informs is the rampant killing of people.

One of the outcomes was to oppose efforts to hold elections in Somalia, terming the plans as "undemocratic" while also rallying for supporters to protect themselves from "infectious" diseases, the group's affiliate propaganda media reported.