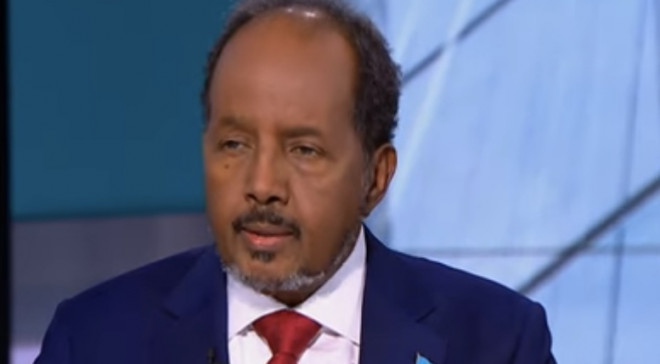 MOGADISHU, (GO) - Most notable activities would have stopped in the country had Somalia declared famine as per the wish of the United Nations, President Hassan Sheikh Mohamud has revealed, adding that the country has strived to curb a myriad of challenges it has been facing for decades.

With rains failing for the last three years, there were concerns that over 7 million people risked famine as the drought hit most parts of the country forcing thousands of people to flee to urban centers and others crossing over to neighboring Kenya as Internally Displaced People [IDPs].

The United Nations High Commission for Refugees [UNHCR] confirmed that thousands of people are yet to be settled at the Dadaab refugee camp in Garissa due to the unavailability of space and food. The UNHCR called for more donations from members of the international community.

But in an interview with Al-Jazeera's Upfront show, President Hassan Sheikh Mohamud insisted that there is no famine in the country as opposed to reports from different quarters, adding that the massive contributions from the international community have made it possible for Somalia to effectively tackle looming famine.

The international partners have been donating food and a colossal amount of money which has made it possible for the country to mitigate the crisis which would have left hundreds dead. Some of the biggest contributors are the European Union [EU], Turkey, the US, and United Kingdom.

In defense, Hassan Sheikh maintains there is enough food to help the country to overcome hunger, noting that most parts of the country have received food and medical aid through coordination between the government and the federal government of Somalia.

"There is no famine at all in Somalia. We managed to avert it after we received support from our international partners. We have enough that can feed our people and we are grateful for this," said the president, who asked the media to report responsively on the situation in Somalia by gathering credible reports.

The government, Hassan Sheikh added, has given the drought and ravaging hunger priority as evidenced by his decision to appoint a special envoy who has been coordinating the awareness by reaching out to the international community to help in pooling resources that are vital in mitigating the situation.

When he took over from Mohamed Abdullahi Farmajo in June, President Hassan Sheikh Mohamud appointed former opposition leader Abdirahman Abdishakur Warsame as the special envoy for drought, a responsibility which the appointee took without delay. He has been mobilizing people to help Somalia.

"This was my priority and that is why I appointed an envoy for drought to help us pool resources, " he said. " There is hunger but you cannot say we are experiencing famine as some people are saying. We are doing our best to help vulnerable families across Somalia who cannot afford food and medication. "

Hassan Sheikh denied claims that Somalia is a failed state, noting that over years, the country has managed to establish a functional government following political reconciliation. He said Al-Shabaab, who have been displacing locals, is on the verge of elimination after a spirited operation that is ongoing across the country.

Some of the areas worst hit by drought include the Gedo region in Jubaland, central areas of Galmadug and HirShabelle along with parts of Southwest. The country has received over $200 million from various stakeholders who have helped through voluntary charitable donations.