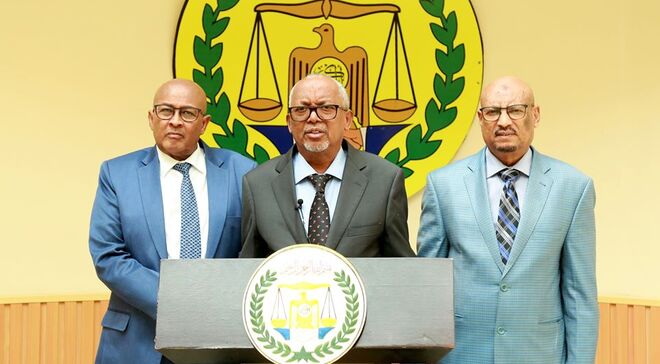 HARGEISA, Somalia - A silent war is brewing within Somaliland's ruling Kulmiye party, which puts at loggerheads President Muse Bihi Abdi and top senior officials, some who are bureaucrats in his own administration, something which could derail ongoing efforts to push for the region's international recognition.

Mohamed Hashi Abdi, a veteran politician and founder of the party, boycotted a crucial convention in Hargeisa, accusing the president who is also the chairman of the party of pre-election rigging, a statement which could cause ripples in government.

Somaliland, which claimed independence from Somalia in 1991, is preparing to hold local elections, following a pre-election agreement that brought together the Kulmiye party and the opposition, mainly UCID and Waddani of Abdirahman Irro. The elections have been delayed since 2010.

At a press conference on Wednesday, Hashi slammed President Muse Bihi for what he termed as "dictatorship", adding that he's determined to ensure the constitution of the party is changed. Bihi has been in charge of the northern breakaway region of Somalia since 2017 and is steering international recognition efforts.

“I haven’t abdicated of my ambition to lead the Kulmiye Party as its next Chairman. On the same token, I have not submitted any application towards this end to the Preparatory Committee the President nominated for the Convention. It is so because I believe President Bihi, the current Chairman, has hijacked the whole set up to fit it to how he wanted it in complete disregard of the Party constitution, bylaws and traditions,” said the veteran leader.

“The Convention will only be nominally re-electing a person who is already elected even before it was convened,” he said, arguing that the party's constitution has been weaponized to discriminate members, who have "worked hard" to put it at the international level.

“The incumbent President has promised at one of his more popular rallies that he will transfer Chairmanship of the party once he was elected to the Presidency. He did not, Instead, he went back on his word and the undertaking he conveyed to party supporters,” he noted.

“President Bihi’s avowed promises rested on the party’s traditions. He was the Chairman of the Party during the whole tenure of the former Kulmiye government. It was an arrangement that allowed the government to serve the people while the part was run by a core of executives which the then Chairman, Bihi, led. He should have upheld that tradition and the vows he made to the party support base,” he said.

Kulmiye party has previously faced opposition from Waddani and UCID but the standoff was solved recently when a deal was reached for early elections. The region is currently sucked into the campaigns of pushing for international recognition and on Wednesday, it officially unveiled offices in Taipei, Taiwan.