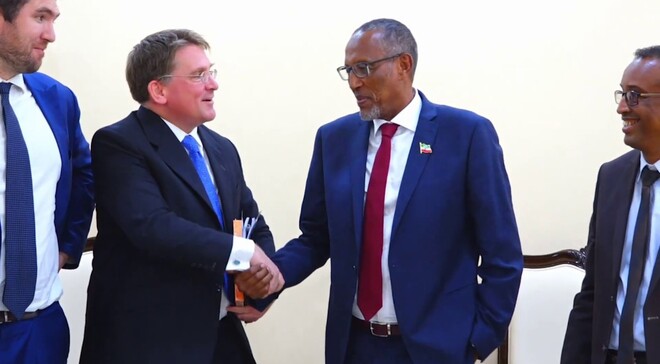 MOGADISHU, Somalia - The international partners have supported the decision by political parties in Somaliland to reconcile, a move which would pave way for elections later on this year, terming the agreement as historical and necessary.

Kulmiye, UCID, and Waddani party agreed to hold local and parliamentary elections this year, a move that effectively ended a standoff that had persisted for several months. The breakaway region held elections last in 2005.

In a statement that was dispatched on Friday, the International partners said the move would improve the democratization process, which has been one of the key agendas of the external partners, who support the region's development.

The partners said National Elections Commission would have enough time to prepare elections that would be agreeable to all stakeholders. The agreement was signed by President Muse Bihi Abdi and three of his main challengers on July 12.

"This landmark agreement presents new opportunities to advance preparations for the elections and requires the NEC to present technical time schedule within 14 days starting from 12th July 2020," read the statement.

The partners said the agreement would give people opportunities to choose their representatives after almost 15 years. The agreement, they added, would promote stability of the region which has been pushing for international recognition.

"Having all Somalilanders being part of the process, notably the large majority of young women and men who have never voted for their representatives or had the opportunity to be elected, is of utmost importance for the democratic credentials and the stability of Somaliland," they said.

"The international partners call for all stakeholders to ensure that women, youth and minority groups are being included, both as voters and candidates and call on the President, Political Parties, Parliament, the NEC, and the Supreme Court to include women and minorities quota in their decisions," the statement read in part.

They commended the region for appreciating a transparent electoral process. Opposition parties have been pushing for elections in the region and have often accused the current regime of sabotaging the process.

"The international community strongly commends Somaliland’s progress towards the elections and is ready to support Somaliland’s electoral process, including safeguarding the women and the minorities quota," they added.

Somaliland broke away from Somalia in 1991 after years of civil war. The region had been pushing for recognition internationally since that time but its efforts are yet to bore fruits, although there are indications that the international community could approve its efforts.