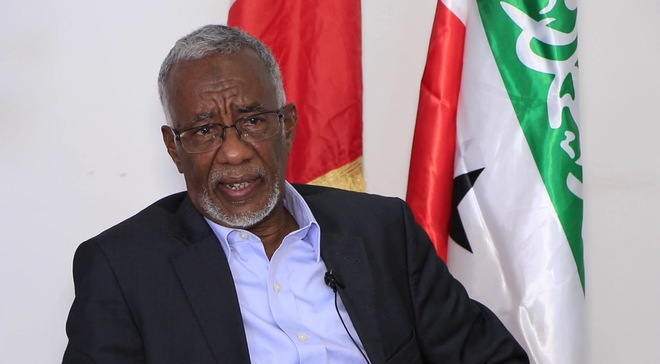 HARGEISA, Somalia - Somaliland continued with her shuttle diplomatic missions this week, with President Muse Bihi Abdi focusing on Turkey which is an instrumental development partner, by dispatching a powerful delegation to Ankara, to iron out emerging issues in the Horn of Africa region.

According to multiple sources told Garowe Online that Bihi dispatched Foreign Affairs minister Yasin Haji Mohamud alias Faratoon to Ankara early this week, and the chief envoy would meet top officials in the European nation. However, it is not clear if he will hold a meeting with President Recep Tayyip Erdoğan.

Faratoon will be holding talks with Turkish foreign affairs officials before meeting top Ankara officials at a conference. Details about the meeting remain scanty but it's anticipated that the minister will discuss Somaliland's quest for international recognition, withdrawal of Turkish envoy from Somalia and Egypt's quest to set up a military base in Somaliland

Ambassador Oglan Baker, who was Turkish envoy to Somalia-Somaliland dialogue, was withdrawn from his jurisdictions in June after Hargeisa and Mogadishu started formal talks in Djibouti that would see the two parties solve traditional differences which have lasted for almost three decades.

While the talks received an endorsement from several international partners, Turkey is said to have been unhappy with the progress. It is not clear whether Turkey is pushing for a reunion of the two regions or wants the status quo to remain, but Ankara is a major development partner of Somalia and Somaliland.

Next month, a ministerial technical committee from both Somalia and Somaliland would table recommendations on cooperation between the two "nations" following a conference that was unveiled in Djibouti.

Ethiopian PM Ahmed Abiy and Djibouti President Ismael Omar Guelleh initiated the talks after immense pressure from the European Union and the US.

Somaliland claimed it seceded from Somalia in 1991, a year after the country's civil war broke out and the military regime led by Siad Barre was overthrown by warlords. However, the region is yet to get full international recognition, a move that has prompted Hargeisa to start high profile diplomatic missions in a bid to push for statehood.

In Ankara, Faratoon is also expected to discuss with Turkish authorities reports that Egypt is keen to establish a military base in Somaliland. The base, analysts argue, would rival TurkSom which has been operational in Somalia, and that has been credited for training elite Gorgor troops within the Somali National Army.

Cairo and Ankara have been at loggerheads in recent months with their rivalry hugely affecting ongoing peacebuilding processes in both Libya and Syria. Both parties are keen to stamp their authority in the Middle East and Northern Africa, and potentially, control the mineral-rich Mediterranean Sea.

Last November, Libya’s embattled Government of the National Accord was under siege in Tripoli by the Egyptian-backed Khalifa Haftar. Haftar, with a rival government based in Benghazi, appeared to be on the verge of ousting the dysfunctional GNA.

Several officials in Libya say their side entered the deals with Turkey reluctantly, late last year, believing they had no choice. They desperately needed an ally as their opponent in the war, Libyan commander Khalifa Hifter, bore down on Tripoli with his forces, strengthened by Russian, Emirati and Egyptian backing, AP reported.

“It was like a give-and-take game,” said one official in Tripoli-based Prime Minister Fayez Sarraj’s office. “They took advantage of our weakness at the time.” He and other officials spoke on condition of anonymity, fearing for their safety in a country largely ruled by an array of militias.

In the end, Turkey sent troops and thousands of Syrian mercenaries totaling to around 3,500 and other military support that helped pro-Sarraj forces repel Hifter’s assault this spring, preventing the collapse of the Tripoli-based administration and shifting the tide of the war.

And in response, Egypt has approved the deployment of her military to war-torn Libya contrary to the expectations of Turkey. Also, Jerusalem Post claimed on Wednesday that Cairo also dispatched close to 150 soldiers to Syria's troubled province of Allepo, a strategic move seen as retaliation against Ankara's activities in Libya and Syria.

The rivalry between Cairo and Ankara could plunge Somaliland into a crisis because it has been enjoying close relationships from both countries. Although Turkey has not publicly issued a statement about Egypt's plans to establish a military base in Somaliland, sources say that Ankara expressed reservations, forcing Bihi to dispatch a delegation to Turkey.

Already, Ethiopia has publicly warned against Egypt's activities in Somaliland, arguing that the intentions are "suspicious". Ethiopia and Egypt have been at loggerheads overfilling of the Grand Renaissance Dam along the Blue Nile, but Somaliland insists that the two nations should solve their differences diplomatically.

On Friday, reports indicated that Ethiopia will be dispatching a permanent envoy to Hargeisa following Egypt's interest in the northern breakaway region of Somalia, a move geared towards "taming" Cairo's activities.

Although it's not clear how the move would shape Ethiopia's relationship with Somalia, however, it would further increase Somaliland's chances for international recognition.