Somalia: Joint committee agrees on terms of engagement between FGS and Somaliland 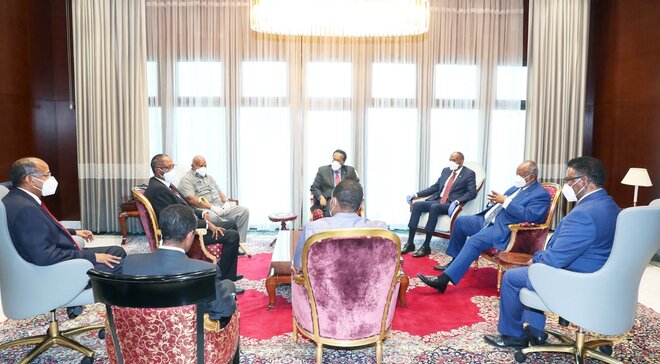 DJIBOUTI - The joint ministerial committee tasked with spearheading dialogue between secessionist Somaliland and Somalia has made tremendous progress just a week after its formation, Djibouti said in a statement, terming the initial talks as "success" to Somali people.

In a statement on Monday, Djibouti said the delegation discussed in a "warm and brotherly atmosphere" in presence of Djibouti Foreign Affairs minister Mahmoud Ali Youssouf and the facilitation from the US and European Union.

During the talks, the communique noted, the technical committee of 14 people picked Somalia's Interior minister Abdi Mohamed Subriye and Somaliland's foreign affairs boss Yasin Hagi Mohamud as the leaders of the joint committee.

The committee met for three days from June 15-17 where contentious issues were discussed in length and agreed upon. Initially, there was a deadlock when some of the committee members differed on certain matters that were critical for kick-starting the talks.

As part of the goodwill gesture, both parties agreed to refrain from acts that would otherwise impede negotiations, adding that such actions would substantially erode the confidence that facilitators and mediators have built so far.

"The two sides agreed on a common way of conducting dialogue with the support of the mediator and facilitators," reads the communique. "They discussed confidence-building measures key to any progress in the mediation. Both sides agreed to refrain from any action that could derail negotiations."

To narrow down the issues, the two parties formed three subcommittees that are now required to come up with solutions before tabling final findings to the joint ministerial team. One of the committees will handle the controversy on humanitarian aid, the statement notes.

"With regard to humanitarian assistance and aid, both sides agreed in principle not to politicize the issue and further endorsed setting of a technical subcommittee," added the statement, which was released a week after the main conference in Djibouti.

Also formed is a committee to find a common ground on the management of Somalia's airspace, which has been a major concern, due to persistent controversy given that Somaliland is not recognized by the international community.

Further, a technical subcommittee on security was established to deal with related issues, the statement revealed. The three subcommittees to convene in Djibouti in two weeks to start working on the way forward and implementing issues agreed upon, the communique stated.

But in the middle of the negotiations, both parties have agreed to depoliticize shared prosperity among the Somali people, who predominantly occupy the two regions. This, they said, includes social-cultural events.

"The two parties also agreed not to impede non-political social engagement especially sports, culture, academics, and trade in order to promote peace and dialogue between Somalia and Somaliland," the mediators said.

The joint Ministerial subcommittee will resume talks in 45 days to review progress made by the subcommittees and the overall progress of talks. It's at this juncture that a final resolution will be made which will determine the modus operandi between the two regions.

According to Djibouti, both parties also agreed to respect the agreed timeline in which the talks should be concluded. The US and European Union are keen to have both parties speaking from the same script ahead of the much-anticipated elections in Somalia.

Somaliland gained independence from British in 1960 on 26th July while Somalia was liberated from Italians four days later before a grand merger. However, Somaliland said it seceded from greater Somalia in 1991, a year after the civil war. broke out