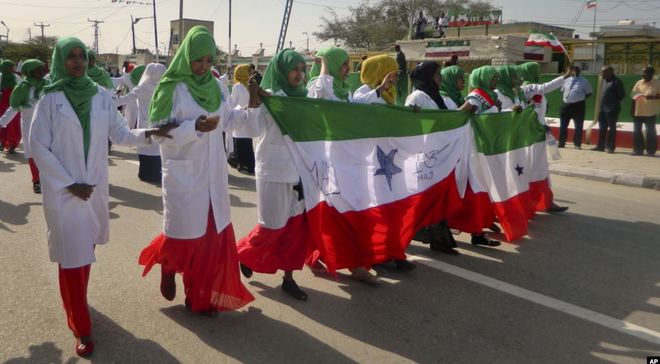 HARGEISA, SOMALILAND — The breakaway state of Somaliland is celebrating 28 years since it declared independence from Somalia in 1991 following the break-out of the civil war.

No country recognizes Somaliland as a sovereign nation.

Inside a boardroom in the Somaliland parliament, legislator Abdurahman Atan explained his country's struggle for international recognition.

Outside, the streets of Hargeisa were receiving a facelift ahead of Saturday, when thousands of people will gather at independence square to celebrate the anniversary of the independence declaration.

Despite the lack of international recognition, Somalilanders like Hargeisa student Mohamed Abdullahi is looking forward to the day.

"According to ourselves we are independent, and that's why we are proud and very happy to see many people celebrating this historic day," Abdullahi said.

After years of conflict and the ouster of former Somali dictator Mohamed Siad Barre, Somaliland declared independence in 1991.

Somaliland now has its own police, army, and currency, and has held regular elections for parliament and a president. It enjoys relative peace and stability, unlike Somalia, where African troops are helping the government fight al-Shabab and Islamic State militants.

But without recognition, Somaliland cannot get foreign aid, and its economy is largely dependent on diaspora remittances.

Atan rejects the idea that other African countries will break apart if the world recognizes Somaliland.

"They are talking about Pandora's box," Atan said. "If, for example, they recognize Somaliland, they think other African regions will also ask for independence, but that's not true." He noted that Somaliland was an independent country before joining Somalia.

Every year, Somaliland invites representatives of foreign governments to Hargeisa to lobby its case. This year is no different, and Violet Akurut, vice chair of the Ugandan parliament's foreign relations committee, has indicated support.

"If our country, our president, recognizes Somaliland, it will be so easy for Uganda to lobby at the African Union for the recognition of Somaliland," Akurut said.

However, the United Nations and the African Union have refused to recognize Somaliland as an independent country. Their position is that once Somalia is peaceful and has a working central government, then the two can be reunited.

Hargeisa resident Mohammed Baarwani wants none of that.

"The Somaliland people decided to withdraw that unity from Somalia," Baarwani said.

He hopes that someday, the rest of the world will recognize that fact.