Somaliland intensifies calls for statehood, this time targeting the US 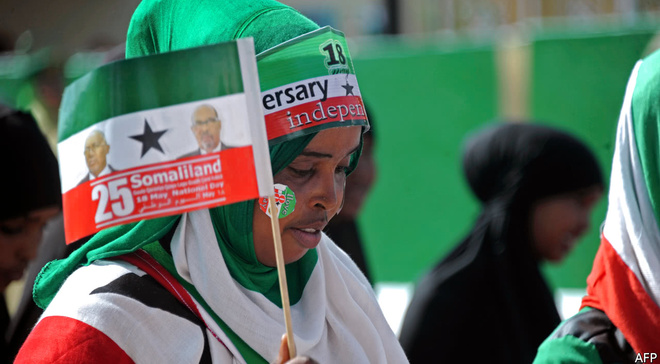 HARGEISA, Somalia - Secessionist state of Somaliland has intensified calls for statehood, this time targeting the United States, one of the world's superpowers which also sits in the influential United Nations Security Council [UNSC], and whose declaration can change fortunes for the autonomous state.

For three decades, Somaliland has been pushing for international recognition but their campaigns have often been derailed by underlying issues with Somalia, which still claims the territory.

The breakaway region claims it seceded from Somalia in 1991 after a reunion of about two decades which was mooted in 1960 when they got independence from Britain and Italy respectively, but so far it didn't win international recognition.

But Somaliland's resilience has taken a new shape, now targeting world economies for recognition quest, with the US now being one of her targets. Washington is yet to recognize the state but has heavily invested in Somaliland, something which could further uplift calls for recognition.

Last month, the US showed signs of approving Somaliland's partnerships with other countries following the signing of bilateral deals between Hargeisa and Taiwan, which is better known as the Republic of China. Taiwan has also been battling international recognition but China insists it's part of her territory.

The White House National Security Council hailed cooperation between Somaliland and Taiwan despite protests from China and Somalia who termed the agreements as "illegal". The US insisted that such cooperation came at the time of "tremendous need".

"Great to see Taiwan stepping up its engagement in East Africa in a time of such tremendous need. Taiwan is a great partner in health, education, technical assistance, and more," read the tweet, which caused discomfort both in Mogadishu and Beijing.

And Bashe Omar, Somaliland's envoy to Kenya, now says the US should recognize Hargeisa, arguing that the region has a fully "functionally independent and democratic" government with also a robust educational system and a coast guard.

"Somaliland has established a robust democracy that has seen peaceful transfers of power between political rivals in 2002, 2010 and 2016," he said in a tweet. "Somaliland as a country is making a strong case for itself by garnering huge international investments and maintaining a stable and robust democracy."

This progress, he noted, warrants international recognition for the northern breakaway region, which is also stable since it has never recorded cases of terrorist attacks like neighboring Somalia. While Somalia and neighboring countries such as Kenya and Ethiopia have recorded several cases of terror attacks, Somaliland has only registered one in as many years.

Besides enhanced democracy, education, and coast guard, the region has also strived to stabilize her economy in as many years. Currently, it is developing the Port of Berbera, which will be an important venture that will expose the region to the rest of the world by providing entry to the Horn of Africa region.

The port is being expanded by freight giants DP-World, which has roots in the United Arab Emirates. Once completed, Ambassador Omar added, the port will increase container cargo by 50 percent and world rival the port of Djibouti and Mogadishu which are important investments in the Horn of Africa.

"The Berbera port expansion project is on course for the completion of phase one before the end of 2020. So far, a 50 percent increase in container cargo has been registered since the expansion project has been undergoing," said the envoy.

"Somaliland can be an important and reliable partner for the US and will be able to contribute more effectively to a sustainable and prosperous future for the Horn of Africa," he added, in yet another statement that is geared towards getting the US approval.

Michael Rubin, a resident scholar at the American Enterprise Institute, says that the US Navy should consider making port calls in Berbera even if Defense Secretary Mark Esper and Secretary to the State Mike Pompeo "do not go that far".

The US currently has a base in Djibouti but there are plans to have the Rapid Deployment Force shifted to Somaliland due to China's growing influence in Djibouti. Both the US and China as using the Horn of Africa as the major military base as they compete for security and economic influence in Africa.

Rubin insists that should the US establish a base in Somaliland, "It is rare a simple action could win a policy trifecta, but sending a destroyer or cruiser to the port of Berbera could achieve just that."

Omar's sentiments were echoed by Rageh Omaar, the London-based ITV editor, who argues that the US and Britain should take advantage of peace and stability in Somaliland to make a "major" pronouncement. Should the two delays, he insists, other suitors would seize the opportunity.

"There’s a growing confluence of vital security snd commercial interests for global powers in & around Somaliland. For now, it’s the West’s (principally the USA also UK’s) interests that most closely align with Somaliland’s- but how long will USA/UK dither before other suitors take a lead," he says.

In recent weeks, Somaliland has been at the epicenter of major economic and security rivalry between Egypt and Ethiopia, both who have an interest in the region. Whether the region gets international approval now or thereafter, it would, however, depend on the implementation of the outcome of the current talks between Mogadishu and Hargeisa in Djibouti.