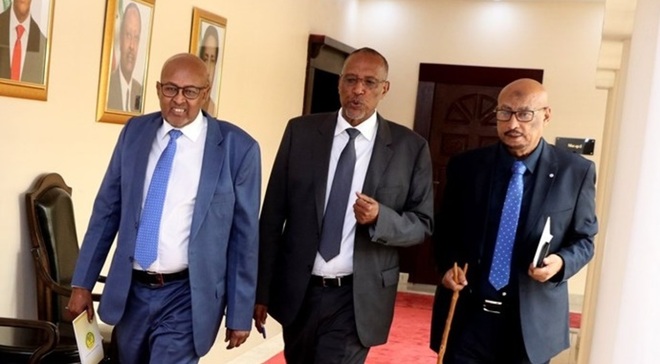 HARGEISA, Somaliland - After almost 15 years of waiting, Somaliland's main political parties have agreed to hold local and parliamentary elections within this year, in a decision that was arrived following a meeting between President Muse Bihi Abdi and representatives of two main opposition parties.

Since 2005, the northern breakaway region of Somalia has been postponing elections due to internal political squabbles, and the differences have often degenerated into an exchange of words between political bigwigs, leading to anxiety across the region.

But in a show of solidarity, Muse Bihi reached a consensus with Waddani leader Abdirahman Abdullahi Irro and the UCID leadership, a move that effectively ends political quagmire in the region, which is currently pushing for international recognition.

In a statement issued by the leadership of the three parties, the protagonists agreed to solve their differences and settled for parliamentary and local elections, which have been contentious hence engineering the standoff, which is now almost two decades old.

"As discussed in our meeting, the country will now go for parliamentary and local elections within this year. This will give the people an opportunity to exercise their democratic rights by choosing leaders of their own choice," read the statement.

The date for elections will be settled by the National Elections Commission [NEC] and will be announced later, the parties said. However, the NEC must ensure the polls are held within 2020 to avoid another round of feuds which could further derail reconciliation processes.

"National Elections Commission will come with a suitable date for the elections and it will be communicated on time. This will help all interested parties to do proper preparations before we carry our exercise," added the statement.

Kulmiye party under the leadership of Muse Bihi Abdi has been in charge, but the failure to hold elections has often triggered heated exchanges with the opposition. The composition of the electoral commission has specifically been contentious.

However, Bihi said the region would always find ways of solving political differences internally, adding that the unity of the country's local leadership is essential at the time they're all fighting for recognition from the international community.

"We may not be perfect but what matters most is our unity," he told reporters in Hargeisa on Sunday. "We must always try to solve our issues internally, and this is our culture. Inviting outsiders is almost similar to interference, we can't move towards that route."

The latest deal has been hailed by the United Kingdom, Somaliland's colonial masters. The UK praised the local leadership for reconciliation, adding that it will pave way for necessary stability and international investment in the region.

Stuart Brown, London's official representative to Somaliland, asked the NEC to immediately come up with the date. The envoy further asked political parties to commit themselves towards finding a solution to the representation of the minority.

"UK welcomes today’s tri-party election agreement. Confirming the role of NEC, seat allocation and a deadline for setting election dates are significant steps towards Somaliland Elections 2020," he tweeted. "Hope parties can also commit to steps for the representation of minorities and women."

The deal could have been triggered by the ongoing quest for international recognition, which has seen Hargeisa launch a diplomatic offensive, a move which has angered Somalia. Last week, the autonomies region signed a mutual cooperation deal with Taiwan and received a delegation from Kenya, further showcasing its urge for nationhood.

Bashe Omar, Somaliland's representative to Kenya who has been on the frontline in the quest for the region's statehood, insists that the world should stand in solidarity with Somaliland, arguing that it has remained relatively stable ever since it seceded from Somalia, contrary to nations that were recognized recently.

"In other newly formed states, violence, corruption, and despotism have overshadowed the promise that existed at the moment of independence. Often, it seems that fragile states are rewarded for creating problems for the international community. This has not been Somaliland’s way," he said.

Last week, the country's mutual cooperation with the Republic of China [Taiwan] was hailed by the White House National Security Council, an indication that Hargeisa's quest could bear fruits in the coming days. The region seceded in 1991 from the larger Somalia after decades of civil war.